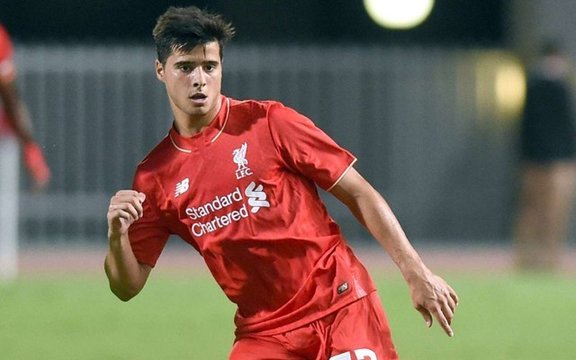 Having reportedly rejected a new contract at Liverpool in the search for regular first team football, Reds playmaker Joao Carlos Teixeira has confirmed that he’ll be making the move to FC Porto this summer with the Portuguese giants paying just £250,000 compensation for him as he puts pen to paper on a four year deal. For those of you keeping track, that’s substantially less than the £830,000 fee the club paid for him four years ago.

“I am from the north [of Portugal] and to wear blue and white has always been a dream for me,” said the ex-Liverpool midfielder. “Now I can work at my club in my region and my country,” enthused the 23-year old, clearly keen on returning home. “I had other offers but do not want anything other than to wear blue and white.”

While he’s a bit young in the tooth to be considered a youngster, Teixeira now joins a growing number of highly rated young players that have left Anfield with their chances in the first team coming very much at a premium. Once hailed as potential first team superstars, the likes of Jerome Sinclair and Jordan Rossiter have already left for greener pastures. Samed Yesil, who arrived with much expectation from Bayer Leverkusen, will leave on a free transfer this summer with his contract set to run out and Sergi Canos, currently embroiled in a stand-off with the club over a new deal, could follow him out the door. Even Jordon Ibe — touted as the perfect replacement for Raheem Sterling — may be shuffled on following a less than impressive season that saw him relegated to the fringes of the squad.

Both Brendan Rodgers and Jurgen Klopp have made a point of giving our younger players a shot at proving their worth, but their time on the pitch and subsequent development has been further and farther between as the club chases a return to the top of the table and Champions League qualification. While there’s been no indication that they’re leaving anytime soon, it’s hard to say what the future might hold for the likes of Lazar Markovic, Danny Ward and even Kevin Stewart. Having made just seven appearances for Liverpool during the 2015/2016 campaign, it comes as little surprise that Teixeira wanted to move on — another player that didn’t quite cut the mustard at Anfield.