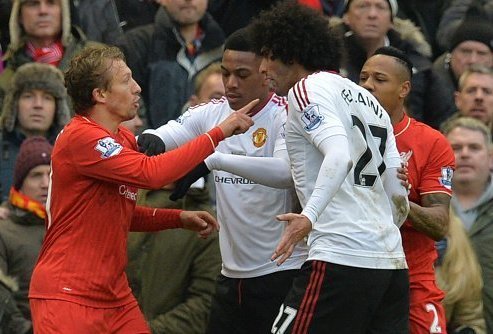 Once a nailed on starter in Liverpool’s midfield, the Reds longest serving player in Lucas Leiva faces an uncertain future on Merseyside with his influence on the squad — and his minutes on the pitch — starting to wane under new boss Jurgen Klopp.

“There have been some changes last season, with the coaching change,” said the veteran midfielder, speaking to Brazilian radio station Joven Pan. “I still do not know exactly what will be my role within the group, but I am returning (to England) on Thursday to start the pre-season. It is the first transfer window in which Klopp will participate more actively in Liverpool, so I’ll just get a better idea when I return,” he continued, before revealing that if he does leave the club, he doesn’t want to leave Europe. “Whatever happens, the idea, as always, is to stay in Europe, especially in England, which has a very strong and good league to play.”

After initially failing to impress following a move from Brazilian side Gremio under then boss Rafa Benitez, the 29-year old has since emerged as one of those classic cult Kop idols with his hardworking displays and ability to get stuck in to a challenge endearing him to the Anfield faithful. While that’s all good and well, having been shuffled down the pecking order on Merseyside and deployed as a make-shift central defender when he is given a run out, his time at the club could be drawing to a close.

Lucas, of course, is no stranger to hard work and could fit in to Klopp’s system, but the 29-year old has a packed field to contend with; club captain Jordan Henderson, German international Emre Can, midfield utility man James Milner, new boy Marko Grujic and, if he’s handed a new contract, potentially Welsh handy-man Joe Allen will all be jockying for a spot in the starting eleven. The rumour mill has been linking the Brazilian with a move away from Merseyside for years now, but this time it could very well happen.