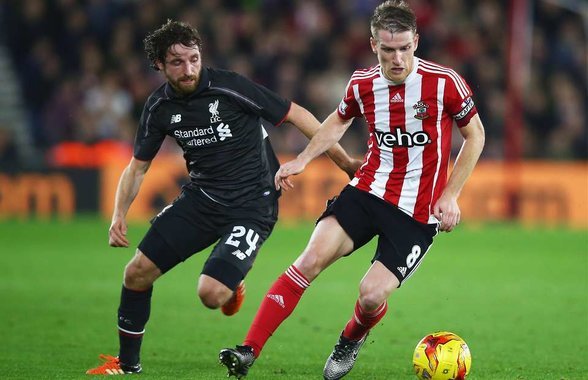 After confirming the capture of Georginio Wijnaldum from Newcastle United yesterday, Liverpool midfielder Joe Allen’s days on Merseyside look numbered. The Reds have already accepted a bid of £13mil from Premier League rivals Stoke City for the in form Welshman, but former club Swansea City, who’ve already had an offer turned down for him, aren’t about to walk away from the table and could go to war with the Potters over his signature.

“We’ve had discussions with Liverpool and there’s been stuff in the press recently about Stoke,” said Swans chairman Huw Jenkins when asked if the club were still looking to bring the 26-year old back to the Liberty Stadium. “Joe is away as far as I know because, like our players, he’s finished the Euros and then needs so many weeks off. Over the next week or 10 days things may move on, but we must remember we have a full complement of midfield players as it is,” he explained, before saying that they’re not giving up hope quite yet. “We’re still in the hunt. Joe is one of our players and we’ll keep that open for as long as we can.”

Allen, for his part, has been quite vocal about wanting his future sorted out this summer. With only a year left on his contract and talks over a new deal yet to get underway, it’s looking more and more likely that he’ll be plying his trade somewhere other than Anfield by the time the new season kicks-off in mid-August. An immense showing at the European Cup in France this summer has raised his profile substantially and the price-tag attached to the combative midfielder has risen accordingly.

“I think £13 million is probably a high valuation for a player with a year left in his contract,” mused Jenkins. “But with the market as it is, we’ve all seen some values put on players, it’s not unrealistic,” continued the Swansea chairman, before adding, “It’s a high valuation, but the market has gone that way.”