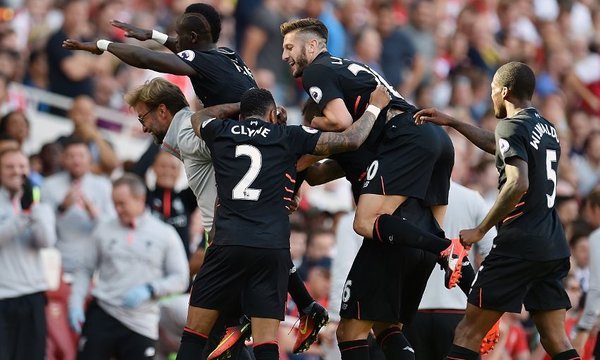 At one end of the field it was the perfect way to kick-off the season and at the other it was a stark reminder that things needs to quickly change if any sort of improvement is going to be made over last year’s finish.

And, oddly enough, that’s a fitting opening sentence for either team — when you share seven goals between the two of you, the margin separating the performances are usually pretty fine. After seeing his penalty saved by Liverpool ‘keeper Simon Mignolet, Theo Walcott gave Arsenal a deserved lead after some poor defending from the Reds back-line, but the visitors were level just before the break with Philippe Coutinho sending a stunning free-kick flying past Gunners shot-stopper Petr Cech. Adam Lallana would build on the lead, the Brazilian would grab another and Sadio Mane bagged a spectacular solo effort as the Emirates Stadium started to empty, but Alex Oxlade-Chamberlain and Calum Chambers would pull proceedings to a more even keel before the final whistle, but not enough to earn the North London side something on opening day.

“We are not ready physically,” said Arsenal manager Arsene Wenger despite declaring quite the opposite only a week ago after downing Manchester City in their final pre-season friendly. “You are in a catch-22 situation with the Euros, whether to give players a rest who need it. They are not ready to play this sort of game and get injured, like Ramsey, or you give them a rest and not have them for the start,” mused the Frenchman after seeing both the Welshman and Alex Iwobi go off injured. “You have to consider, as well, that we have been unlucky with losing Mertesacker and Gabriel, and having Koscielny not fit.”

I said it in my match preview and I’ll say it again here — we’ve both got problems, bro. The hosts may have had an inexperienced pair in Calum Chambers and Rob Holding playing in the heart of defence as well as a number of other high profile absentees with the likes of Mesut Ozil missing in attack, but their visitors weren’t exactly stacked with their preferred starting eleven. Ragnar Klavan, who was excellent on this Premier League debut, deputized for Mamadou Sakho and both Daniel Sturridge and James Milner both watched from the sidelines as they continue to nurse their respective injuries. These were two teams doing what they do best — scoring goals and terrorizing their opposition with pace, passing and guile.

“What an idiot I would be if I thought like this,” said Liverpool boss Jurgen Klopp when asked if Arsenal’s defensive pairing played any part in the scoreline. “They played really well in the first half, they did really well, and I have no idea if they were really involved in our goals,” explained the charismatic German. “First goal, for sure not; second goal, a pass in the box and Lallana free – I didn’t think for a second about the centre-half pair of Arsenal.”

If anything, he’ll be thinking about our own defensive frailties after seeing his side race to a 4-1 lead, only to see the Gunners pull two goals back and make the closing stages a seriously tense affair. It’s still early days, but watching that made it like last season — or the one before that, or the one before that, etc. etc. — never ended. Electric going forward and nervy on the back-foot; the more things change, the more they stay the same.

With that being said, having won for the the first time away to Arsenal in five years, it’s hard to be too upset with anything. It’s only early doors, so there’s still time to plug up the holes. And, even if we don’t, it’s pretty obvious that we have the fire power to compensate…