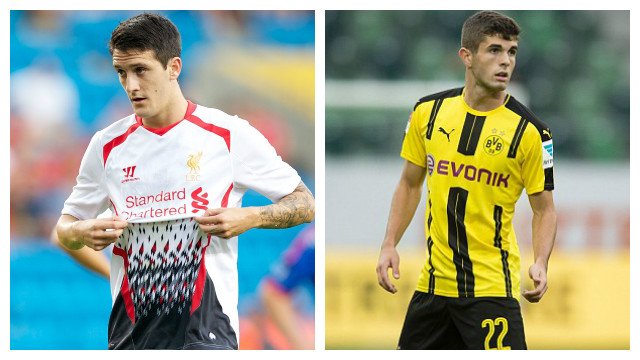 The scuttlebutt at the beginning of July was that Liverpool misfit Luis Alberto would be returning to La Liga for another season long loan with Deportivo La Coruna, but after the deal with the Spanish strugglers fell apart, he’s headed for Italy with Lazio agreeing sign the 23-year old for £4.3mil — only a slight loss on the £6.8mil the Reds paid for him three years ago.

The deal will also reportedly include a 30% sell-on clause for the Reds as well as various, unspecified add-ons that could see the fee take a further bump in the coming years. That, of course, represents a pretty good return on player that has spent the last two seasons out on loan and who was unlikely to find a place under Liverpool boss Jurgen Klopp. If all goes to plan, Alberto should be a Lazio player by this time tomorrow with a medical and further talks already on the docket.

Coming the other way, reports persist that the Reds aren’t giving up hope of signing Borussia Dortmund winger Christian Pulisic despite the German club rejecting their opening bid of £11mil for the American. Signed under Klopp during his time at the Westfalenstadion, the 17-year old broke in to Die Schwarzgelben’s first team last season with a number of impressive performances. With his profile raised considerably, Liverpool are rumoured to be interested in drafting in the starlet, but the Dortmund remain reluctant to sell.

And that’s despite the fact that he remains quite a ways down in the depth chart. German duo Marco Reus and Andre Schurrle are commanding top billing on the flank while French wonder-kid Ousmane Dembele and young Turk Emre Mor make life difficult for the established starters — just where Pulisic might fit in remains to be seen. There are whispers going around that BvB boss Thomas Tuchel may consider letting him leave on loan to keep his development on track, but it’s unlikely he’d end up on Merseyside with the Reds unlikely to be able to provide him much more game time than he’d be getting in Germany.