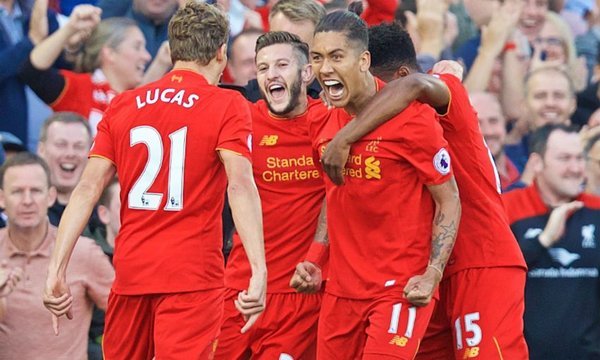 It was certainly a day to remember for all Liverpool supporters as the mighty Reds thumped reigning league champions Leicester City 4-1.  The new main stand was unveiled and officially announced open by club owners FSG (Fenway Sports Group) on Friday. A day later, the redeveloped stand was at full capacity for the first time to see an commanding performance from Jurgen Klopp’s men.

Liverpool introduced the returning Lucas back to the side who replaced Dejan Lovren alongside new signing Joel Matip at the back. After much debate as to who would feature in goal against the Foxes, it was Simon Mignolet who maintained his place ahead of the returning Loris Karius. Daniel Sturridge returned to the starting line-up as talisman Philippe Coutinho dropped to the bench after travelling long distances on international duty with Brazil. James Milner was still favoured by the boss at left-back ahead of Spaniard Alberto Moreno.

There was uncertainty as to which Liverpool side would turn up prior to the game after mixed performances so far this campaign. Their first game back at Anfield was marked by a number of fans who turned up to greet the team bus into the new players’ entrance of the main stand. Early on it seemed to have little effect as the hosts seemed uneasy in front of a crowd of over 53,000 fans — the largest since 1977. That was soon diminished after Roberto Firmino put us 1-0 up after slotting home past a helpless Kasper Schmeichel. Liverpool grew in confidence as Sturridge was denied by a great save from the Danish goalkeeper to prevent the Englishman doubling the lead. Liverpool got that crucial second goal as Sadio Mane was set up by a clever back heel from Sturridge after Jordan Henderson played the striker in from a long ball over the top. Despite the absence of Coutinho, the Liverpool attack of Sturridge, Firmino, Mane and Adam Lallana was sensational and unplayable at times as the visitors struggled to contain the Reds slick, pacey forward play.

With seven minutes until half time, another defensive mistake, another goal conceded. Lucas was pressured by the Leicester attackers after the Brazilian received the ball from an unnecessary pass from Mignolet’s goal kick. A poor touch forced Lucas to play the ball across the goal were Jamie Vardy was waiting and pounced on the end of the astray pass to bring the Foxes back into the game. From then on, Leicester threatened an equaliser in the closing minutes of the first half, but it wasn’t to be. 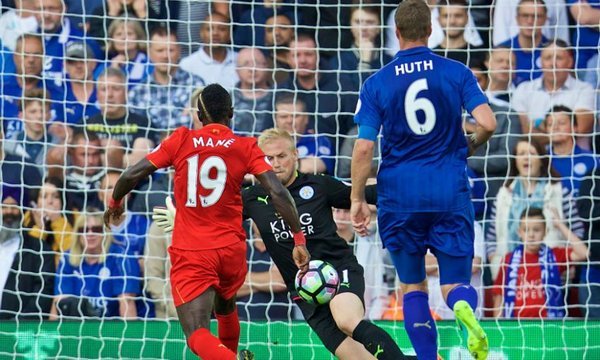 The second half started how the first finished; Momentum was with Claudio Ranieri’s side early in the second 45-minutes, however, Liverpool soon regained their grip on the ball, and shortly after Lallana, who rescued a win for England earlier in the week, was on target for the Reds as he hammered into the roof of the net at the Kop End to restore the 2-goal cushion once again. Liverpool’s defence stood strong and was able to hold off an array of Leicester attempts after Mignolet made a vital save to deny Vardy a second goal. After opening the scoring, Firmino closed it by grabbing his second of the game after another long through ball from Henderson deep in the Liverpool half; Schmeichel came out of his box to be beaten by the pace of Sadio Mane, who was composed enough to tee up the Brazilian to slot into the empty net making it 4-1 and round off an outstanding performance.

Despite the criticism toward Henderson, the skipper put in an exceptional display in the holding role showing great composure on the ball and decisive passing. Even though Liverpool gifted the opposition a route back into the game, the defence put in a great performance. Lucas didn’t shy away from his mistake, Matip played brilliantly, as did both Nathaniel Clyne and Milner. Overall, it was a day to give us all extreme confidence for Friday’s clash against Chelsea at Stamford Bridge. As for the atmosphere in the expanded stadium, it really is a taster for what is to come should Liverpool put up a challenge for the top for.

Who knows, maybe even a title challenge…