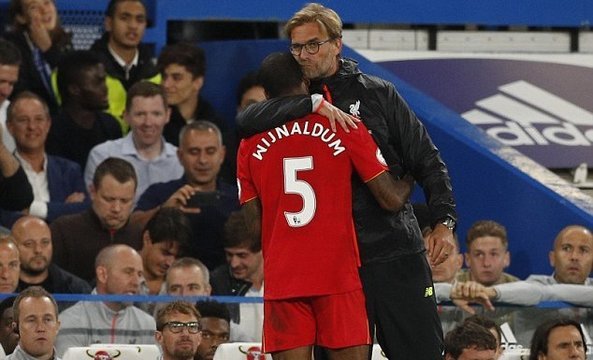 Quietly at the center of much of what was good about Liverpool’s first half performance as they downed Chelsea at Stamford Bridge on Friday night, Reds midfielder Georginio Wijnaldum has quickly come in to his own since making the move to Merseyside from Newcastle United this summer — and, a lot of that, he puts down to boss Jurgen Klopp.

“This is a very talented squad with a great coach,” the Dutchman told the Liverpool Echo. “I believe he is building something special here. I got that feeling when I first met with Jurgen Klopp,” explained the 25-year old. “I knew this was the right club for me. I am happy to be a part of it. I feel blessed,” added Wijnaldum. “Our gameplan is always to start on the front foot like that. To dominate our opponent. We try to do that, no matter who we are playing against. That’s the way we train and it’s what we’re good at.”

Lacking the panache and flash that one might expect from a blockbuster midfielder, Wijnaldum instead did the kind of things that players like Joe Allen and Lucas are known for — ticking over play, joining in the attack when possible and making we not only won the ball back quickly, but that we didn’t lose it once we had it. Completing 84% of his passes, having a dangerous pop on target, putting in three tackles, a clearance, interception and a block, he might have done just that, but that’s not good enough for him.

“Of course I want to score. I’ve always scored through the years, no matter who I’ve played for. But I’m happy when I can do a good job for the team like against Chelsea,” continued the Dutchman. “I’m learning game by game and I think I’ll continue to get better. I hope the goals will come soon,” said Wijnaldum, sounding keen to learn and adapt to Klopp’s all action system. “This is a different style of playing. In this style you need to look to each other. I have faith in the way we are playing. I’m enjoying it.”