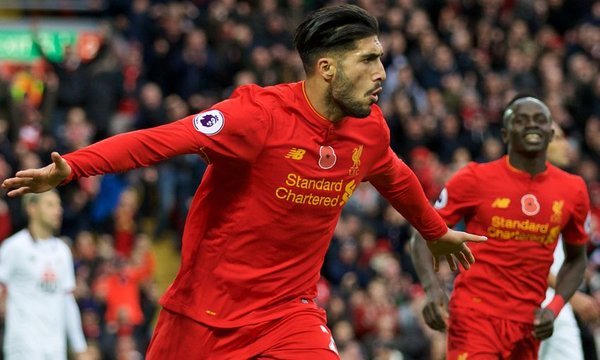 Having bagged a goal in his last two appearances on the hop, Liverpool midfielder Emre Can is getting back to his best after some early season injury problems kept the maverick German resigned to the sidelines. Back in the side and loving his football, the former Bayern Leverkusen man has begun to once again stamp his authority on matches, but he’s admitted that there’s one facet of his game that won’t be improving anytime soon — his celebrations.

“You never know, but I can’t dance, so that’s a problem!” said Can with a laugh when asked if he’d be copying the likes of Philippe Coutinho, Roberto Firmino and Sadio Mane’s slick dance moves. “I didn’t think about the celebration before the game to be honest,” added the 22-year old, reflecting on his airplane celebration following his goal against Watford FC. “It was just my reaction after the goal. I don’t know why I did it, but I am happy the fans enjoyed it.”

Bagging his first of the season in the six goal thriller with Crystal Palace, Can was quick to follow that up with his sublime header against the Hornets and he credits his new found license to go forward with his growing output in front of the net. With Adam Lallana expected to miss the trip to Southampton this weekend, he’s almost certain to retain his spot in the side when the Reds run out at St Mary’s tomorrow.

“I’ve played a little bit differently to last season,” he told the club’s official website. “I’ve been playing offensively so I think I make the runs into the box more,” explained the German midfielder. “Last year I played more in the role of holding position and this year I’ve been playing more in the half-spaces. Playing in the half-spaces means I can go forward more,” added Can, going on to reveal that the work the club is putting in at Melwood is paying off in spades. “The goal I scored against Watford, the header, well two days before the game we’d worked on that move in the training session so it was nice to actually score it.”