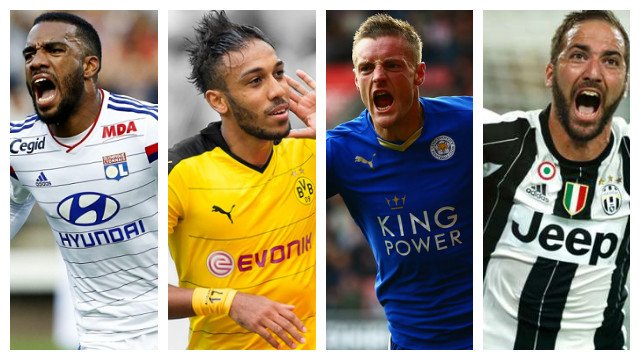 January could see a striker merry-go-round if reports claiming that Daniel Sturridge is preparing to leave Liverpool are anything to go by. Sturridge, who also plays for England has gone down the pecking order at Anfield, as Jurgen Klopp plans to go with Roberto Firmino in the Reds’ rise to the top of the Premier League chart. This season, the England forward scored five goals for his country and club with his recent score against Scotland making it six goals. The match ended with England beating Scotland three goals to zero. In his most recent appearance with Liverpool, Sturridge was subbed in with 12 minutes remaining and almost contributed to the late go-ahead goal, but Nathaniel Clyne hit the ball wide off his cross to the back post. According to the Mirror, Sturridge is not happy at Anfield. This situation has left Klopp with no option but to seek a replacement for Sturridge. However, who is he likely pick?

Last season, Alexandre Lacazette was named one of the most promising strikers in Europe. He scored 31 goals in the 40 appearances he made for his team Lyon. This season, the 24 year old player has gone of the trail, scoring only eight goals in 22 appearances. The number of goals he scored this season is an average return for a forward of his status and quality. However, the French international has shown signs of rediscovering his swiftness in recent weeks. Like Sturridge, Lacazette is an excellent dribbler, which makes him the perfect replacement.

Jurgen Klopp and Pierre-Emerick Aubameyang know each other very well. This makes it easy for Liverpool to get his services if they can part with a bit more money. Klopp was the one who signed the Gabon international to replace Robert Lewandowski during his tenure at Borussia Dortmund. The 26-year-old Pierre-Emerick Aubameyang has outdone himself at Signal Iduna Park during the past season scoring 25 goals in 46 appearances. The player has netted the same number of goals this season and Christmas is even not even here yet.

Leicester City’s Jamie Vardy is one of the best strikers in the world. Jamie, who will be turning 29 next month, is leading the battle for the Premier League’s Golden Boot Award with an impressive 14 goals in 15 appearances this season. The England international has played an essential role in Leicester’s good start to the season as well as last year’s amazing season. His dribbling skills, athleticism, and goal scoring abilities make him a striking arsenal. The player has proved to be the best at what he does since the start of the season.

Higuain would have been an incredible replacement, but he signed the most expensive release in Italian football history when he signed with Juventus for 90 million Euro. Gonzalo had been looking to move to the Premier League on a number of occasions over the past few years. In the summer of 2013, the former Real Madrid player nearly moved to Arsenal. Gonzalo has scored 68 goals in 120 appearances since he joined Napoli more than two years ago.

Worth the gamble? Well Liverpool fans will be waiting with bated breath to see who coach Jurgen Klopp settles for as Sturridge’s replacement.

One thought on “Who is Likely to Replace Daniel Sturridge if the Striker Leaves Anfield?”