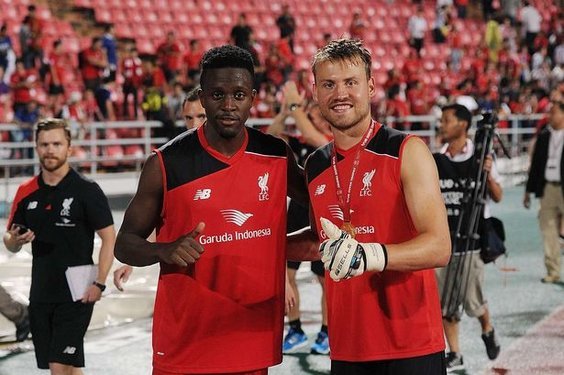 Although there’s been some grumbling from displaced Liverpool ‘keeper Simon Mignolet in the past couple of weeks about not wanting to play second fiddle to newly crowned Anfield number one Loris Karius, the Belgian will be handed a chance to impress when Leeds United visit Anfield in the League Cup quarter final on Tuesday evening.

“If nothing happens, Simon will play. 100 per cent,” Reds boss Jurgen Klopp confirmed in his pre-match press conference. “I think last time in the press conference it was not the idea to make 11 changes, it happened after the press conference, sorry!” he replied, joking about shaking up his whole side in the previous round against Tottenham Hotspur. “I have no idea at this moment because we need to have a look at the boys and how they feel and I have to talk to them,” explained the German manager, not ruling out doing the same against the Championship side. “So the players need to be fit and that’s what we have to decide from now on. The line-up, I don’t have to make it until five o’clock tomorrow.”

Along with Mignolet, his compatriot in Divock Origi is expected to be given the nod as well after he Belgian replaced the injured Philippe Coutinho at the weekend and marked the occasion with a spectacular effort to open the scoring against as resolute Sunderland defence. The 21-year has found his chances few and far between this season with the aforementioned Brazilian, Sadio Mane and Roberto Firmino making up a deadly front three, but like Mignolet, he’ll be given a chance to push for more minutes against Leeds.

“It’s good, but actually there’s no alternative to being patient – what would be the alternative? That you moan every day, that you talk every day to me or your teammates? That’s the way it works,” said Klopp when asked about Origi. “It was 100 per cent – and I know this – not the easiest time for him but it’s not that it’s the worst time in his life,” he added with a smile. “That’s the thing – the group is very respectful with all the players, we don’t have the kind of players that when they are not in the line-up or first XI they don’t have the same values or something.”