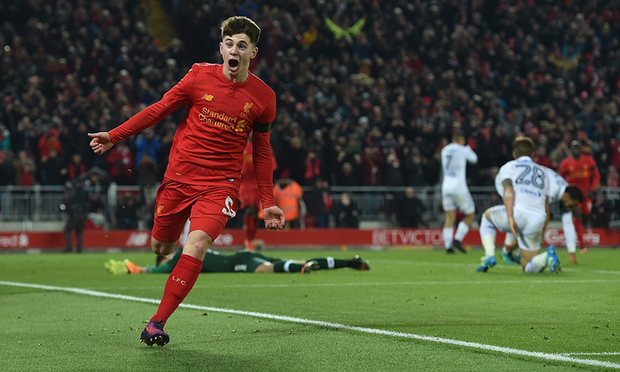 It was another slow burner at Anfield, but goals from Divock Origi and youngster Ben Woodburn saw Liverpool through to the semi-finals of the League Cup with a dominant, but uneven win over Championship side and familiar foe Leeds United.

Making 8-changes from the team that beat Sunderland at the weekend, Reds boss Jurgen Klopp kept one eye firmly on their trip to AFC Bournemouth and drafted in the kids to do the dirty work against the West Yorkshire club. Though they kept the game in control, the lack of a cutting edge was telling with Gary Monk’s side going close to snatching an unlikely lead on either side of the break as Ronaldo Vieira saw his shot hacked away after Simon Mignolet was left flapping at a corner and Kemar Roofe’s sumptuous curling effort smashing off the inside of the post.

They may have been struggling to finish their chances, but that’s not to say that Liverpool weren’t in the mixer with Leeds ‘keeper Marco Silvestri saving brilliantly from Georginio Wijnaldum’s volley and coming out the better of two as Emre Can’s rolled effort ended up just wide of the post, but it would take a moment of brilliance from Trent Alexander-Arnold and Origi for the Reds to break the deadlock with the latter sneaking through a pack of defenders to get on the end of the former’s whipped cross and poke home.

Clearly in control, they’d add another for good measure; it was on this day back in 1998 that Steven Gerrard was handed his first team debut by former Reds boss Gerard Houllier, and watching from the stands tonight, he must have had a smile as wide as the Mersey River when Woodburn bagged the winner in front of the Kop. Brought on for Kevin Stewart as Klopp pressed for the win, the 17-year old was on hand to smash home Origi’s flick-on and become Liverpool’s youngster scorer, smashing Michael Owen’s record by 99-days.

“He is a brilliant young player,” said stand-in captain and the clubs current longest serving player in Lucas Leiva. “He did very well. He just needs to keep learning, keep improving,” added the Brazilian, obviously chuffed for the youngster. “A goal will give him confidence to keep learning, to keep going.”

There’s certainly more to come from Woodburn, and, obviously, there’s more to come from the Anfield outfit as well with a two-legged semi-final on the calendar to kick off the New Year. Who do you want in the next round? I’m hoping for a certain club from Manchester, but for that to happen they’ll actually have to win a match, won’t they?