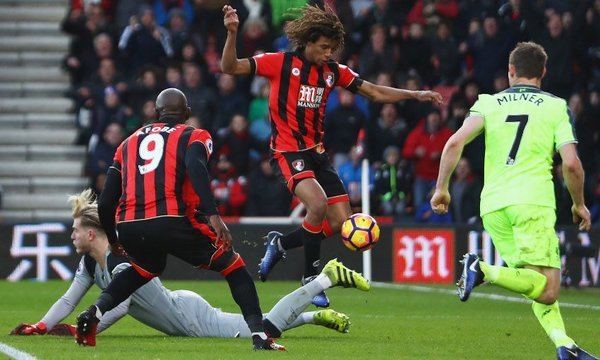 Liverpool’s 15-match unbeaten run can to a crashing halt on the South Coast, going from taking a comfortable into the break to giving up an injury time winner as AFC Bournemouth claimed their first win over the Reds in a Premier League fixture to not only dent the title run of that team from Merseyside, but lift them up into the right half of the table.

Jurgen KLopp looked pleased as the visitors potted a pair within the span of two-minutes with Sadio Mane taking advantage of some direct play from Emre Can to beat Cherries ‘keeper Artur Boruc and Divock Origi scoring his third in as many outings with a curling strike from an acute angle, but the German’s chill would begin to evaporate midway through the second as James Milner clattered Ryan Fraser — the man who’d be a catalyst for the comeback at Dean Court — in the area to send Callum Wilson to the spot.

Tick a few minutes off and Can had restored Liverpool’s two goal advantage with a thumping strike from the edge of the box, but another quick-fire burst of goals at the other end of the pitch saw Bournemouth draw level with a poor clearance from the Reds defense allowing Fraser to drill one past Loris Karius before the 22-year old set up Steve Cook for their third three-minutes later.

Deep into injury time and you could make it up, but no one would believe you — with both sides pushing for a winner, Cook’s shot from distance is fumbled by Karius and Nathan Ake, who has popped up in the box, has both time and space to poke it past the German. Cue the scenes on the terraces; cue a million face palms quickly followed by a torrent of expletives.

“First of all I have to say a deserved win for Bournemouth. A big fight from them. We gave the game away at a decisive point. We opened the door and they ran through and scored some wonderful goals. So that’s the deserved result,” said Klopp, matter of factly. “Even when we are in the lead at 2-0 it’s how we try to play football then we were static. We gave the game away because we didn’t play football any more,” continued the German, sounding more than slightly disappointed. “If we learn it’s OK. At 2-0 or 3-1 the game is not decided but the way we played after we gave it away,” added the Liverpool manager. “We gave Bournemouth the ball. These things happen.”

Now, you have to give credit where it’s due — the Cherries were as good as we were sloppy. Patient on the ball, willing to defend as a unit and work hard for their chances, they laid bare the reasons behind their meteoric rise and added another gleaming example of why Howe is one of the best young managers around. Did they have a bit of luck? Of course, but if you chalk it up to that, you weren’t watching.

Given the circumstances, that might not have been such a bad thing; missing Joel Matip, the defence were back to their chaotic worst and though that’ll only serve to amplify the need to draft in a defender on par with the Cameroonian, it’ll also serve as a stark reminder that “trying to score more” isn’t always the best game plan. It’s exciting of course, but if you can’t hold a lead, you’re going to get punished for it — and we did.