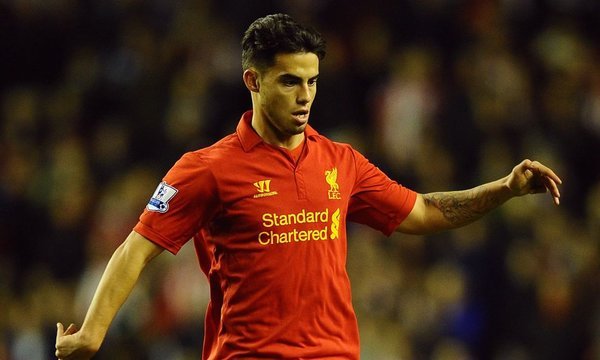 Dani Pacheco. Rings a bell, right? Maybe you can picture his grinning face right now or maybe you think he signed for Sunderland in 2015. If it’s the later – you’d be wrong, that’s Fabio Borini.

Fabio Borini. Rings a bell, right? No, no. I’m not going to put you through that. It was painful enough for me.

I'm far too enthusiastic about Fabio Borini. Ah, well. Everyone has that one player they *really* want to do well.

That being said, Liverpool have had a lot of players that seemed to be the next big thing – Borini was once known as the “next Del Piero” in Italy – I’m being serious – and a good portion of these players have moved on and made a name for themselves elsewhere.

Let’s begin with with Suso, another player I was very keen on.

I'm glad that Suso has gone on loan to Almeria, he'll shine in that league and more importantly gain some first-team experience.

Breaking through at around the same time as Raheem Sterling, the little Spaniard is to Philippe Coutinho what Panda Cola is to Pepsi – he’s similar but just not as good and has a considerably smaller price tag. Suso always looked to be on the brink of breaking into Liverpool’s first team and just as it looked like he may feature on the right wing at Anfield for the next few years, he was loaned out to Almeria by Brendan Rodgers.

Following this move, he never really got another decent chance in Liverpool’s first team and in January 2015 he completed a transfer to AC Milan. He was initially loaned out by Milan, when he first joined the Rossoneri, and spent a season with Genoa. After this he was tipped to play a pivotal role in a new-look Milan.

He’s been in a fine bit of form recently, scoring a brace in the Milan Derby, meaning that his side took a point against Inter in a 2-2 draw.

This one might be a bit of a test of your memory but Liverpool once had a defender that was even worse at decision making than Martin Skrtel. Paletta joined the Reds in 2006, making just three Premier League appearances in his only season with the club; one of which was a 6-3 loss to Arsenal. Ouch.

The Italian had risen back into the limelight by the time 2010 had come around, signing for Parma where he formed a solid partnership with Alessandro Lucarelli and breaking into the national team (!) before moving to Milan in 2015. At Milan, Paletta gone and done a Liverpool all over again – he failed to make a name for himself and is currently on loan at Atalanta.

I have one strong memory of Insua; I can’t remember who it was against but he was through on goal – one-on-one with the goalkeeper – but he made the dreadful decision of passing the ball across an empty box. No goal. That being said, Insua did look to be a promising young left back at Liverpool and he went on to become that, only he did it away from Anfield.

He left Liverpool permanently in 2011 when he joined Sporting Lisbon; he performed very well there – so much so he earned himself a place in the Argentine national team and a transfer to Atletico Madrid (who very nearly won La Liga) in 2013.

He was subsequently loaned out to Rayo Vallecano, he played well, and in 2015 he joined German side Stuttgart, where he is a regular first team player.

“The next Robbie Fowler,” they called him; to be fair what Ben Woodburn is doing now at Liverpool is similar to what Morgan did in 2012/13. He wasn’t quite as mobile though, but he was a threat on goal.

He may have looked good playing for Liverpool’s U21s but Morgan has struggled at almost every club he has joined – be that on loan or permanent transfer.

Six league goals in three years is hardly a record he’s going to want to bring up when he hangs up his boots. Luckily, Morgan is only 22-years-old and still has a lot of potential.

Currently playing well for conference side Curzon Ashton; three goals in three games is a much more impressive record to boast about than the other three goals, spread thinly at a goal per year.

It wouldn’t surprise me if Morgan had his own underdog story one day, à la Jamie Vardy.

This article is the first in a series that will focus on Liverpool players of yesteryear. Check Paisley Gates for more content. This article was originally published on Blasting News.