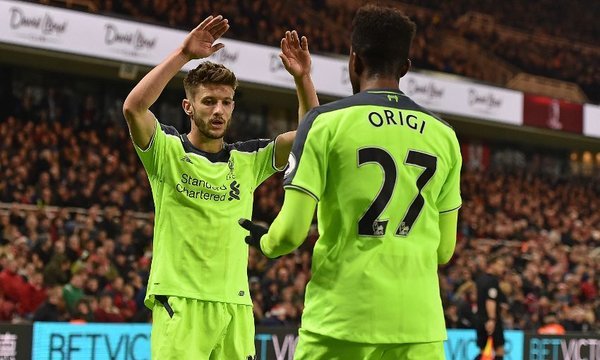 Without being unnecessarily disparaging of Middlesbrough or over the top in my praise of Liverpool, I’d have to say the scoreline was a perfect reflection of what we saw at the Riverside Stadium — a result that could have been far worse on the hosts.

Compact in the defense and cautious in pushing forward, Boro kept their visitors restrained for the most part during the opening exchanges, but a genius of a cross from Nathaniel Clyne found Adam Lallana in the right place at the right time for the midfielder to break the deadlock with a powerful header just before the half-hour mark. Divock Origi doubled up with his fifth goal in as many matches not long after the break, and looking like the best player on the pitch, Lallana effectively ended this one as a contest less than 10-minutes later with a precise finish.

The big talk before the match was around Jurgen Klopp’s decision to recall Simon Mignolet to the starting eleven and pull Loris Karius out of the firing line, but besides a 25-yard effort from Fabio and a good save from Viktor Fischer’s stinging near post shot, the Belgian was relatively untroubled as the Reds comfortably controlled proceedings. Along with Karius, Joel Matip was another notable absentee with a foot problem keeping the Cameroonian sidelined, but he thankfully wasn’t missed as Ragnar Klavan held things steady alongside Dejan Lovren.

“The first half was already good, but we had this moment when it was a little bit too intense for us to be always in possession, to have the ball all of the time – one player needed a break, one wanted a break, one wasn’t concentrated, we were still passing in the wrong spaces, so that was when Middlesbrough had their moments,” explained Liverpool boss Jurgen Klopp, reflecting on the frantic opening exchanges. “It was intense – more intense than it should have been – but in the second half we did it much better. We could have finished more often; I don’t think we should have scored more often,” said the German manager, sounding quite content. “3-0 is the result, a deserved result I would say, but we could have finished more often. It was a really good performance.”

Coming off the back of two disappointing results, this was exactly what the Reds needed. Despite losing to AFC Bournemouth and drawing with West Ham United, Liverpool were arguably the better side in both outings, but a creaky defense and some bad luck stunted the constant pressure they were keeping on league leaders Chelsea. There was no hint of that on Teeside though as Aitor Karanka’s side laboured to keep pace with their visitors. Creating little going forward, Adama Traore was the one bright spot in a Boro outfit that’s lacked a respectable output in front of the net since being promoted to the Premier League, but even he couldn’t do much to trouble the Reds back-line.

Which, ahead of the Merseyside Derby on Monday, is good news. Getting back to winning ways was priority number one for Klopp, but, again, with all due respect, Everton are sure to pose an entirely different threat than Middlesbrough were able to muster — which is fine by me. I like it when things get feisty…