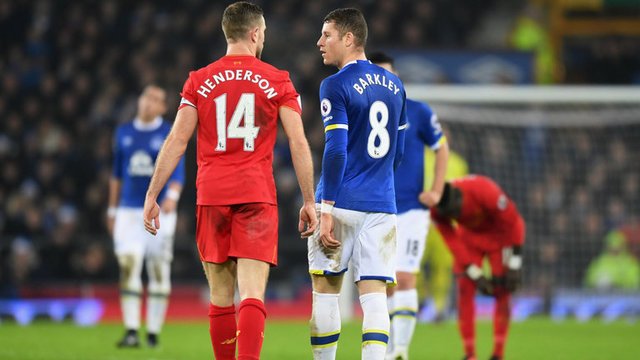 Sadio Mane snatched a late winner at Goodison Park last night as Liverpool not only kept pace with Premier League leaders Chelsea, but made sure that Everton have won only once in their last 20 Merseyside Derbies. The typically feisty affair was punctuated by a number of flashpoints, but none were more explosive than Toffee’s midfielder Ross Barkley’s very ugly challenge on Reds captain Jordan Henderson.

“It was pretty late,” the Liverpool skipper told Sky Sports. “I know Ross well — he’s a good lad, I’m good friends with him. I think he just mistimed the tackle, obviously,” said Henderson, waving away any suggestions to the contrary. “After the game he apologised,” revealed the 26-year old. “Thankfully I’m all right. It was just mistimed, you’re going to get them in derby games. When you’re on the pitch you give 100 percent to win the game.”

The visitors, of course, rallied around their captain as a bit of a fracas ensued afterwards, but the late winner from Mane — pouncing on a loose ball after Daniel Sturridge’s shot hit the post in injury time — ended up being the perfect cool as you’d like response to such a hot headed affair. While Barkley may have been lucky not to of been sent off, Henderson, on the other hand, is very lucky to have not picked up a serious injury — a view that’s shared by Reds boss Jurgen Klopp.

“I saw it was a really harsh challenge,” said the Liverpool manager. “You saw it all, so I don’t have to say anything about it this,” added Klopp, trying to move on to another topic. “I think Ross was lucky and Hendo is lucky. Nothing else happened.”