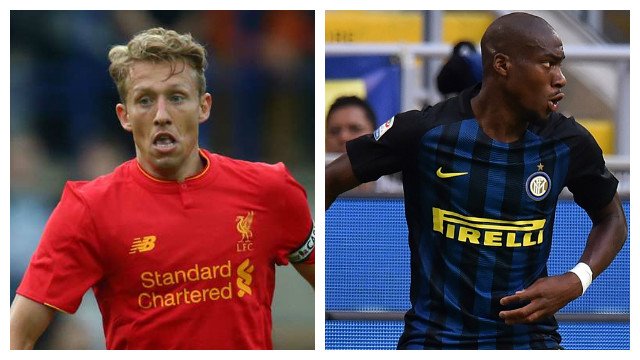 Going on to make 291 appearances for Liverpool after arriving from Brazilian side Gremio back in 2007, Reds midfielder Lucas looks set to end his long standing engagement at Anfield with the 29-year old being linked with a move to Serie A side Inter Milan.

Following the 4-1 win over Stoke City earlier in the week, Liverpool boss Jurgen Klopp refused to discuss the South American’s future when pressed by reporters. telling BBC Sport that “When it is not speculation then there will be something to say.” Well, it sounds like the German manager is going to start talking soon with reports circulating that Lucas has already completed a medical with the Italian giants ahead of a January loan to Stefano Pioli’s struggling side.

Having seen a move to Turkey blocked during the summer, reports that the Brazilian is on the move comes as no surprise. Finding his playing time limited since Klopp’s arrival, Lucas has been continually linked with a move away from Anfield with the Nerazzurri rumoured to be a long time suitor. Although his switch would be only temporary, according to Sky Sports Italia, the Serie A side will apparently look to make it permanent in the summer when his contract expires — which could very well pave the way for Geoffrey Kondogbia to move the other way.

The French midfielder has struggled to find his feet at the San Siro this season, but that apparently hasn’t dissuaded a long list of admirers from checking in on the 23-year old. Much like Liverpool’s plans for Lucas, Inter are looking for someone to take him off their hands for the rest of the campaign, but unlike the Brazilian, they’d want a cool £18.5mil to square everything up come the summer. Klopp has continually insisted that the Reds will not look to do any business in January unless it makes sense for them, but this could be a move too good to pass up.