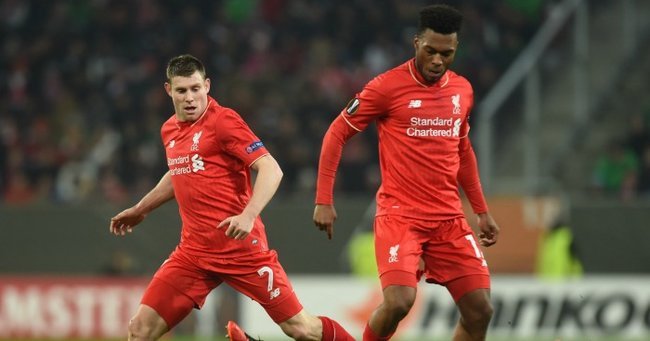 With a busy January just over the horizon, Liverpool boss Jurgen Klopp has already hinted that he’ll shuffle things up when Plymouth Argyle visit Anfield on Sunday in the FA Cup Third Round, but he stopped well short of confirming whether or not injured duo Daniel Sturridge and James Milner would have a part to play.

“Daniel didn’t train until now,” said Reds boss Jurgen Klopp, speaking to the assembled press at Melwood on Friday morning. “Probably today [he will return to training], we’ll see. It depends how he feels, that’s how it is,” added the German manager, quick not to promise anything when it comes to the perpetually injured striker. “It should be possible, but I’m not sure.”

And, later in the day, pictures on the official site would go on to confirm that he did return to training. Sturridge, who took a painful looking knock to the foot during the closing stages, opened the scoring early on against Sunderland on Sunday in what looked like would be a seriously one sided affair only to end up running out a disappointing draw at the Stadium of Light. Milner, on the other hand, made way at halftime for Alberto Moreno having pulled up with a calf problem. Neither injury is thought to be serious, but they’ll likely keep them out of action against the League Two side — a match that both would have likely been rested for regardless of their availability.

“[Milner is] better,” explained Klopp. “We were lucky, we had no proper injuries after the game so that’s all good, but Millie had this little issue with the calf,” continued the Liverpool boss. “We were not sure, because of the intensity or whatever, that it wasn’t more, but I am pretty sure we will not take the risk with him for the weekend.”