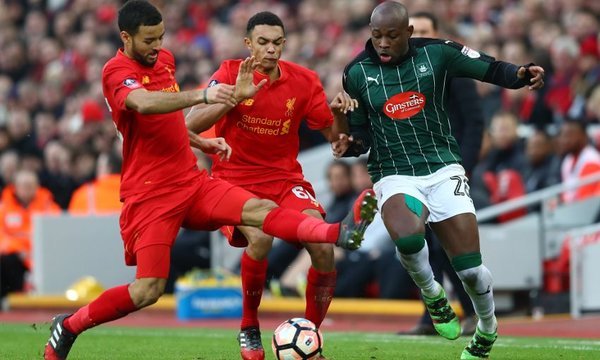 Getting exactly what they didn’t need, Liverpool’s jam packed January just got a bit busier with League Two side Plymouth Argyle forcing the youngest side in the Reds history into a replay after a rather dour, scoreless draw at Anfield.

Financially, this was probably the best outcome for the Pilgrims with the match at Home Park set to be played in ten days time and it’d be a stretch to even try to say that they were playing for anything else. The onus was always on the hosts to open the game up, but with the relative inexperience of the starting eleven showing up like a pimple on prom night, that was always going to be easier said than done as their visitors defended in numbers, set up to stifle rather an create.

Naming a side with an average age of 21 years and 296 days, Liverpool boss Jurgen Klopp made ten changes from the team that ran out a disappointing draw against Sunderland as he kept his eyes firmly on the first leg of the League Cup semi-final with Southampton midweek and the trip to Old Trafford that follows only a few days later. That, of course, was always going to be a gamble; sometimes it pays out and sometimes you have to make an unnecessary trip to the South Coast.

Sometime in the future the German manager will navigate a round of the FA Cup without having to deal with a replay, but not today. The fact that Plymouth ‘keeper Luke McCormick had the most touches of any visiting player tells the story in and of itself. Handing Joe Gomez his first start since the fall of 2015 alongside the likes of Kevin Stewart, 17-year old Ben Woodburn, Ovie Ejaria and the injury plagued Sheyi Ojo, the kids told a familiar story. You complain when the kids don’t get a fair shake and you complain when they don’t live up to the hype; stop me if you’ve heard this one before.

“It was not for one second an open game,” explained the German manager, speaking to the press following the final whistle. “It was a very dominant game from my side, [but] with no real chances. One or two shots, that’s normal the longer the game is,” continued Klopp. “But they did everything they had to do to deserve a rematch. Now we have it, yippee!” added the Reds boss with mock enthusiasm. “Plymouth is a good place to go.”

Unable to create space in the attacking third, shift the ball forward in a purposeful manner or translate possession in to any meaningful threat, the kids produced a lot of speculative efforts from distance and floated just as many aimless crosses in to the box that the Argyle backline was only too happy to field. Even the introduction of Daniel Sturridge, Roberto Firmino and Adam Lallana as time ticked down failed to produce the breakthrough, but by that point, you would have expected we’d be cushioning a comfortable lead. Call it inexperience, call it whatever you want — the real question is, did the boys learn anything and if they did, will they take advantage of it?

We can piss and moan as much as we’d like about having another game on the cards, but it’s pretty safe to say that Klopp will be naming a pretty similar if not the same side when we visit Home Park for the replay. If you’re going to have a manager in charge that puts a focus on bringing players through the academy, then you’re going to have to put up with days like these. This is the future and they future needs to time on the pitch; here’s to hoping it pays off in the long run.