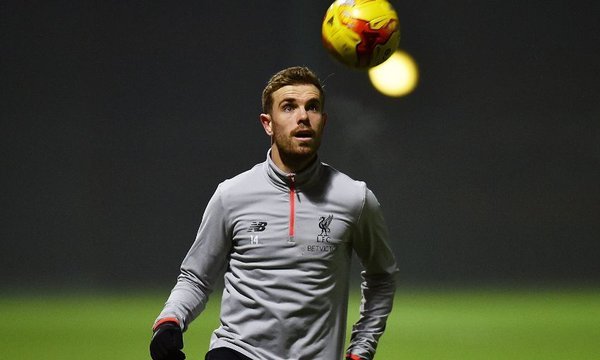 Looking a touch off the pace during the closing stages of the shock loss to Swansea City at the weekend, there were suggestions following the final whistle that Liverpool captain Jordan Henderson was being hampered by an ongoing heel problem, but speaking to the press ahead of their League Cup semi-final meeting with Southampton on Wednesday, Reds boss Jurgen Klopp trook some time to clear up what’s going on with the skipper.

“It’s different, it’s similar but still different. We know much more from last year about it,” said the German manager when asked about Henderson’s plantar fasciitis. “We don’t train a lot in this period between the games so instead of running one day, when the players who have played 90 minutes are running for recovery, he’s on the bike – that’s maybe the only difference with what we do with him,” explained Klopp. “The rest is how I said – you don’t use the phrase ‘bite on his teeth’ [grit his teeth]? You know what it means, it’s not the moment to feel nothing, he always feels a little bit, but he can cope with it,” added the Liverpool supremo before confirming that it wasn’t his foot that was the culprit on Saturday. “It was not his heel, he got a knock.”

Thankfully, it sounds like whatever happened won’t keep him from facing the Saints with Klopp going on to confirm that they have no fresh injury concerns going in to Wednesday’s match. Trailing by a goal, the Reds have it all to do when Claude Puel’s side make the trip to Merseyside.

“In Southampton, after the game we knew it was not a good game from us. But probably both managers were frustrated, both because of the result,” said the Reds boss. “In this game they had chances to do it more clearly. Not because of possession – their counter-attacks were good and in different moments they were really clear in the situation and we didn’t defend it well,” conceded the German. “It was only a 1-0 and that’s no different for us, 0-0 or 1-0 is no different. If we would have been down 3-0 we would have to think about a few things. But it is only 1-0 and so still everything is possible for us.”