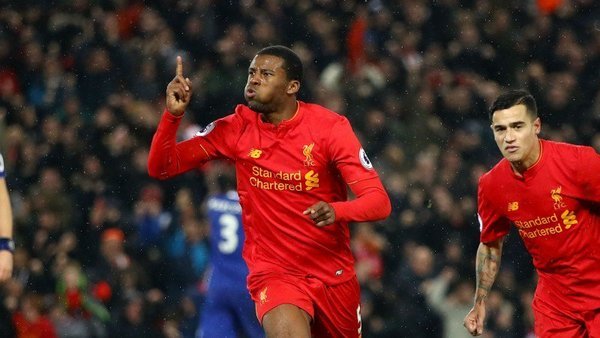 We may not have been able to take all three points at home against but coming from behind to draw with the Champions-elect – and Simon Mignolet saving a penalty in the process – isn’t the worst result, considering our recent form.

Chelsea’s goal came via a set piece, which, may I add, should not have been given as a free kick. Eden Hazard played Mark Clattenburg and we were the victims.

We can’t take anything away from David Luiz however, that free kick he hit was sublime; even if Mignolet was paying attention (he wasn’t, later admitting he didn’t even hear the whistle) he probably wouldn’t have been able to stop it going in off the near post.

Liverpool dominated much of the proceedings, having the lion’s share of possession and we’re probably unlucky not to take all three points – especially as Roberto Firmino had two golden opportunities in the second half to double Liverpool’s scoreline.

Gini Wijnaldum scored the equaliser for Liverpool not long after the second half got underway; Jordan Henderson picked out James Milner in no man’s land and our number seven flicked the ball into the box, paving the way for Wijnaldum to power a header beyond Thibaut Courtois.

Chelsea, as they often do, were giving the referee some difficult decision but a very cheeky dive to the ground by Diego Costa, from little Joel Matip contact, gave Chelsea a penalty with only ten minutes left on the clock.

Mignolet made up for his prior mistake and went down low and to his right to deny Diego a goal at the Kop end.

After the penalty, the game was very end-to-end and both sides had opportunities to take all three points but, in the end, a draw is probably the right result.

A point against Chelsea isn’t the worst thing that could have happened this week for us, especially as Arsenal lost against Watford and Spurs failed to beat Sunderland on the north east coast.

Manchester United take on Hull tomorrow and City face off against West Ham – here’s hoping that they don’t have their fair share of luck and we retain our advanced hold on fourth place.

Liverpool now have 15 games to play for the remainder of the season and if we play like we did tonight – with a few improvements over the coming weeks, properly bedding Sadio Mane, Joel Matip, Phil Coutinho and Nathaniel Clyne – we will qualify for Champions League football.

Chelsea take on Brentford in the next round of the FA Cup and for as long as they’re still in that competition, we might be able to expect their form in the Premier League to waiver… wishful thinking, I know.

To summarise, we can’t be too disappointing with drawing 1-1 with Chelsea. Considering our recent form, I’d have taken a goalless affair at Anfield and I thought that would be optimistic.

Our season had apparently fallen apart last week – to be fair, we did get knocked out of both Cups – but, as of right now, we are three points clear of City and only a point behind second-placed Spurs (who we play very soon).

I, for one, am looking forward to getting this season right back on the rails against Hull this weekend.