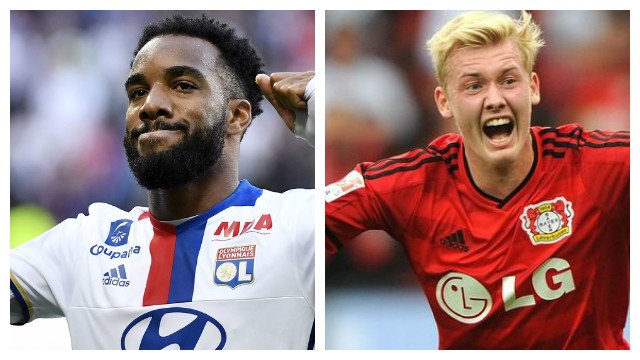 With Liverpool striker Daniel Sturridge set for talks this summer over his future at Anfield, speculation has been rife that the perennially injured striker’s time on Merseyside is drawing to a close. While no one is quite sure what’s happening internally, in the press anyways, the Reds are being linked with a whole host of replacements — and, as usual, Olympique Lyonnais striker Alexandre Lacazette is right near the top of the list as the versatile hit-man quickly closes in on 30-goals for the season.

“We’ll see at the end of the season,” said Lyon manager Bruno Genesio, once again forced to respond to speculation about where the 25-year old will be plying his trade next year. “It could be hard to keep him but we’ll see.”

Even if they do secure Champions League football for next season, Liverpool are bound to face a fight for Lacazette’s signature with the Frenchman coveted by a host of top level clubs. The same, of course, goes for Bayer Leverkusen youngster Julian Brandt who looks to be laying the ground work for a move away from the BayArena at the end of the season. While most of the transfer tattle swirls around star striker Javier Hernandez and midfield maestro Hakan Calhanoglu, the 20-year old attacker has been making a name for himself in the Bundesliga with a rumoured release clause of €17mil sure to tempt more than just the Anfield outfit.

“You can take the step (abroad), but I don’t think you have to. Those that back themselves to do it have nothing in their way,” the youngster told German media outlet Deutsche Welle. “I don’t think it’s a bad thing to try and find your feet abroad. Julian (Draxler) and Leroy (Sane) are the best examples of that right now. They are both young players and have huge futures ahead of them,” enthused Brandt, who looks on course to be lumped into the same category. “It’s tough to say. I’m happy here and what happens next, we will see.”