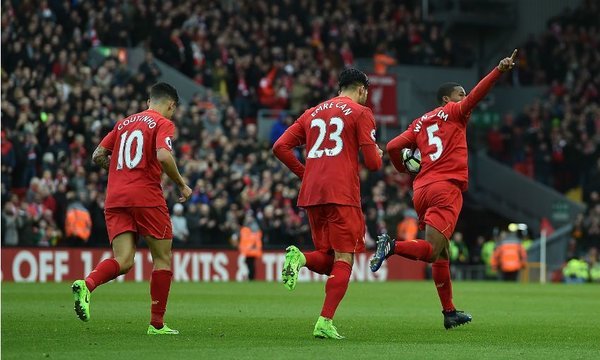 Liverpool kept their chances of securing a top four finish alive by following up the comfortable win over Arsenal last weekend at Anfield with a narrow victory over Burnley FC as the Claret’s woes on the road continued.

“It was difficult in the beginning especially because they scored a goal in the first few minutes, but we just tried to fight and do everything to win the game,” said Reds midfielder Georginio Wijnaldum, who canceled out Ashley Barnes’s early strike just before the break. “We were better in the second half but we were also a bit lucky; previous games we played like this we lost, but then we didn’t have the fighting spirit. At this stage of the season it’s better to collect points no matter how,” mused the Dutchman, knowing full well that both the Gunners and bitter rivals Manchester United are close behind. “We did it before against the bigger teams and we will try to do it again.”

Collecting their first back to back Premier League victories since the turn of the year, the Reds not only prevented Sean Dyche’s side from completing their first double over the Anfield outfit for almost a hundred years, but kept their momentum going ahead of their visit to Manchester City, who they are a mere point behind, next Sunday.

“It was a really important win and we are happy to get the three points,” explained Liverpool midfielder Emre Can, speaking to the press after bagging the winner just past the hour mark. “Second half we played better but they were good in the air and were dangerous,” conceded the German, full of praise for the visitors. “I don’t score too much so it is good but it’s the three points that matter”.