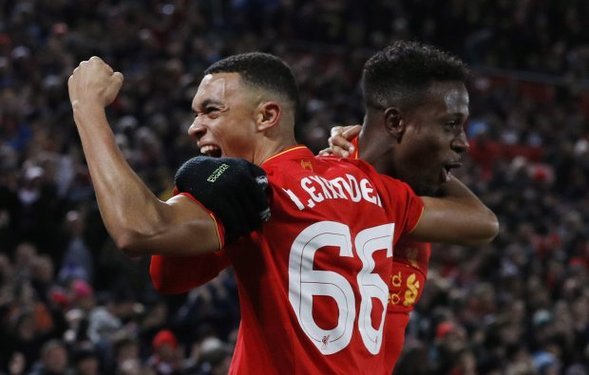 The big news may have been Dejan Lovren making a return to action as Liverpool’s U-23 squad downed their Chelsea counterparts earlier in the week, but the real story to come out of Prenton Park on the night was the Man of the Match performance from young fullback Trent Alexander-Arnold.

“He was a constant threat and he also defended very well when he had to as well. He’s he a very good place in his development, really, really well at the moment and we were really, really pleased with how he did tonight,” said the Reds U-23 manager Mike Garrity when asked about the up and coming defender. “I would say it’s probably given him a massive lift, a big surge of confidence (first team games), it’s made him grow up a little bit I would say, mature a little bit as a footballer being around experienced first team players every day which is what he probably needed and he’s took to it like a duck to water,” added the newly installed development coach. “He’s developing really, really well and he was terrific tonight.”

With Liverpool boss Jurgen Klopp watching on from the stands, the 18-year old made his case for a bigger role in the first team. Strong in the tackle, confident in his passing and willing to bomb forward to join the attack, Alexander-Arnold is developing into exactly the kind of player that suits the German manager’s all-action style of play to the point that incumbent right-back Nathaniel Clyne is being forced to look over his shoulder.

“It reminds me of when I was that age, making it through to the first team,” he told the club’s official website. “He’s such a young lad and he’s full of confidence, you can see on the pitch that nothing fazes him. You can see he’s definitely talented and he’s got a real bright future ahead of him,” continued Clyne, heaping praise on his young colleague. “He’s doing really well. On the ball he’s technically gifted, he can put in a good cross and he’s good defensively as well. He’s a quality player. You can see he’s improving,” added the former Southampton man. “He’s more confident and he’s fitted right in. He doesn’t look out of place.”