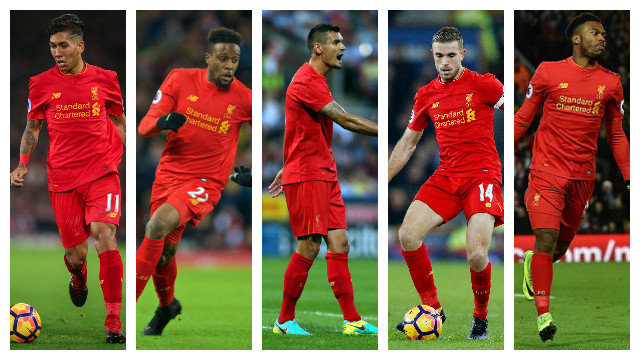 Liverpool boss Jurgen Klopp was handed an injury boost ahead of Sunday’s meeting with Manchester City after Reds defender Dejan Lovren made a successful return from injury with the U-23 side earlier in the week, but the German manager couldn’t build on that good news in his pre-match press conference as he revealed they could be short up top when they make the short trip to the Etihad Stadium.

“Roberto Firmino didn’t train with the team so far, but should probably be involved today or tomorrow, so could be an option,” explained the Liverpool manager, making it sound like the Brazilian could miss out for a second successive week. “The icing on the cake is that Divock Origi was off yesterday because he felt a little bit – probably not serious but in our situation we have to be really sensitive. That’s what we did. We will see if he can be involved today or tomorrow, but it’s not 100 per cent,” added Klopp, sounding less than enthused. “We have a few open questions, but Dejan played on Monday night and he is fit.”

That, of course, could be a major problem. With Daniel Sturridge still feeling the effects of a hip problem, the Reds face the very real prospect of squaring up to the Citizens without a recognized striker in the squad. Add to that Philippe Coutinho’s patchy form and Jordan Henderson’s ongoing foot issues and things don’t look good at all.

“What can I say about the injury situation?” said Klopp, waxing rhetorical. “So, we missed a few players in training this week,” continued the German matter-of-factly. “Who will not be involved? Hendo, but I said already last week he had no chance,” said the Reds boss before confirming yet again what we already knew. “Daniel Sturridge, no chance.”