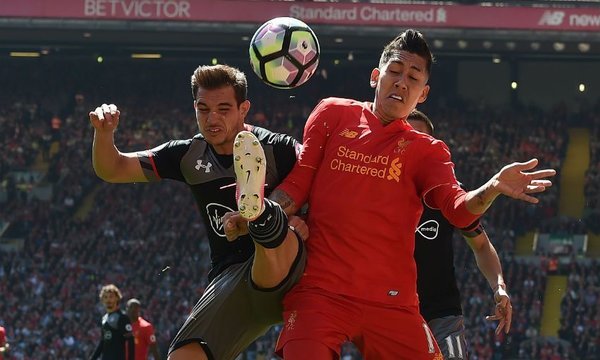 Missing a golden opportunity to put the top four race in a strangle hold, Liverpool could only run out a scoreless draw with Southampton at Anfield earlier today as the Reds failed to find the net for their fourth successive meeting with the Saints.

We knew the script before kick-off; it was effective before and it was effective again as the South Coast side set themselves up to defend in numbers, throwing forward momentum to the wind knowing full well that their hosts would struggle to break them down. That strategy looked to have back-fired when Liverpool fullback James Milner stepped up to the spot after Jack Stephens handled in the box, but Southampton ‘keeper Fraser Forster got on the end of his well struck penalty to deny the stand-in skipper.

By all rights, the visitors should have had one of their own when Simon Mignolet appeared to puts hands on the ball outside of the box when he rushed out to meet Dusan Tadic only for it to escape the attentions of the officials. With just over 20-minutes left to play the Reds tightened the vice following the Daniel Sturridge and Adam Lallana, but it another sub in Marko Grujic that went closest with the Serbian’s header tipped over by Forster just when the Kop thought they’d nicked a win right at the death. That the Saints didn’t register a single shot on target tells the bulk of tale, but unlike the Anfield outfit, they’ll be happy with a well earned point.

“I thought our performance was good enough to win. Southampton wanted to come here and somehow get a point, or more – I’m fine with defending,” mused Liverpool boss Jurgen Klopp, trying to make sense of it all. “They did not create anything and we had a hard job to do. To play against 10 deep defending Southampton players is very difficult. We could have scored, that would have opened them up a bit. It is a point more, but it doesn’t feel like that,” added the German matter-of-factly. “It is not finished yet. We all have to play our games. We go to West Ham and try to win, and that’s all we can do. We try everything and we do not stop.”

Hopefully “try everything” includes trying something different. The front three of Roberto Firmino, Philippe Coutinho and Sadio Mane couldn’t stop scoring earlier in the season, but when you take one of them out of the equation, it hasn’t worked quite the same and that was wholly apparent again today with the hosts missing the effervescence of the Senegalase wide-man. The introduction of another former Southampton favorite in Lallana did well to help offset the lack of invention in and around the box that Mane brings to the team. With that being said, it was Sturridge, who is being heavily tipped to leave in the summer, that made the biggest impact as the 27-year old linked up well and stretched the Southampton back-line.

Unfortunately, they weren’t stretched quite far enough and that’s a problem. Once again, our future isn’t in our hands; Arsenal putting one over on Manchester United kept the dogs at bay for another week, but both hold matches in hand and either could pip us to our spot in the top four before it’s all said and done. It was always going to be a nervy finish to the season, but we’re just making it that much worse — not that I’m surprised at all. That is the Liverpool way, isn’t it?