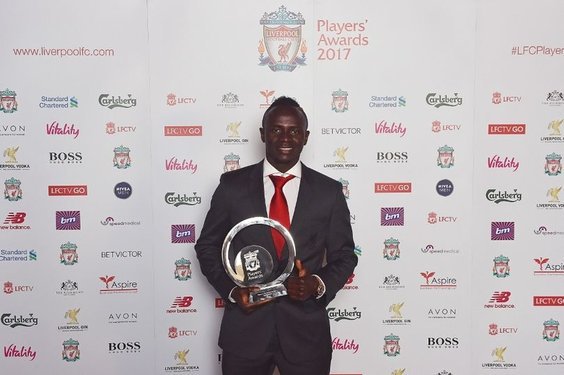 Pipping Liverpool talisman Philippe Coutinho to a Player of the Year award is no easy feat, but Reds attacker Sadio Mane was a fully deserved winner as the Senegalese international picked up the prestigious gong at the clubs end of the season awards.

“I just want to thank my team-mates and supporters for giving me this honour,” said Mane. “It means so much to me. I feel at home at this club and in this city,” continued the 25-year old. “My team-mates, the staff, the manager and the supporters have all made me feel so welcome since I joined the club,” added the Senegal striker. “I have loved every minute of playing for Liverpool this season and can’t wait to get back fit to help the team again.”

Also named in the 2016-17 PFA Team of the Year, Mane has had an impressive run at Anfield since moving from Southampton for £34mil during what was a busy summer on Merseyside. Despite missing Liverpool’s run in to the end of the season through injury and representing his country at the Africa Cup of Nations in Janaury, he still managed to bag 13-goals in the Premier League and pitch in with 5-assists. Mane has cemented himself in the Liverpool first team, meshing seamlessly alongside Brazilian duo Philippe Coutinho and Roberto Firmino in an electric front-three.

Along with the Player of the Year award, the pacey winger also proved that he’s a real fan favorite by picking up the Supporters’ Player of the Season award — something his last gasp winner against crosstown rivals Everton at Goodison Park may have helped him secure.