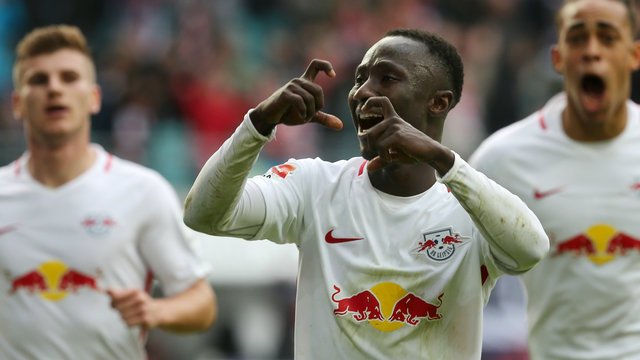 Despite all the talk to the contrary, German side RB Leipzig have made it abundantly clear that they’re not interested in parting ways with breakthrough star Neiby Keita and with the Saxony side set to play in next season’s Champions League, there’s really no need for him to leave the Red Bull Arena to compete at the highest level.

“I really don’t worry about such things. My only focus is on our games and my performances; they are the most important things,” the Guinean midfielder told the Bundesliga’s official website. “I am a young player who never cares about rumours or what appears in the newspapers. I am now looking forward to a well-earned holiday and then to next season,” added Keita, brushing all the internet chatter off to one side. “This is like a dream!”

Although Liverpool are rumoured to be ready to pay somewhere in the region of £50mil to secure his services, Leipzig have publicly pushed back on any attempts to lure their top players away. Now, the news that they’re set to sign RB Salzburg midfielder Konrad Laimer — who is being touted as a replacement for the all-action African — will raise an eyebrow or two, but the German side have already said that they’ll look to strengthen their squad rather than sell their best players off to the highest bidders. And, if that’s true and they want to seriously compete on Europe’s biggest stage, they can go parting with guys like Keita.

“We succeeded brilliantly and, by finishing second, we can of course feel more than satisfied,” explained the 22-year old. “But we don’t want to sit back. We will continue to progress and ride this wave of success for as long as possible,” stressed Keita, keen to move forward. “We are really keen to discover what the Champions League is all about. Every player dreams of playing in it, and we will do everything in our power to make a difference in the tournament.”