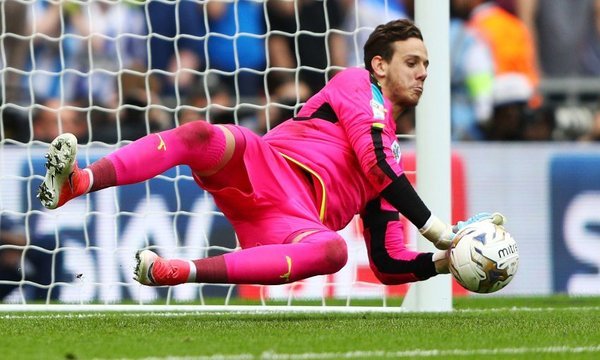 The English loan system can be a peculiar thing; it seems to work out really well for some players while for others it’s just a stopping off point on the way to another stalled career — it’s still early in his career, but it doesn’t look like on loan Liverpool ‘keeper Danny Ward is going to fall in to the latter category.

Hailed for his heroics in Huddersfield Town’s semi-final win over Sheffield Wednesday, on the Reds shot-stopper would have went to Wembley hoping things were all wrapped up in normal time, but the Welshman had to do it again, saving the decisive penalty as the the Terriers squeaked past Reading Town to earn promotion to the Premier League in what will be their first ever season in the top-flight.

“Goalkeepers go out as heroes for saving them, but my four heroes are the boys who stuck it in the back of the net,” said Ward, speaking to BBC Radio 5 Live at Wembley following the final whistle. “It was 120 minutes of grit and determination,” added the 23-year old, who impressed against the Royals throughout and made a big claim for a spot back on Merseyside next season. “Huddersfield Town are in the Premier League – it’s unbelievable.”

With veteran ‘keeper Alex Manninger calling time on a playing career that’s almost as old as Ward, there’s going to be a vacant pair of gloves at Anfield for the coming campaign, but questions remain whether or not Ward is ready to take up the challenge. Reds boss Jurgen Klopp has admitted that he hasn’t made a decision over his future and there are suggestions coming from Huddersfield, who are managed by the German’s close personal friend in David Wagner, that the Terriers will look to either make the move permanent or at the very least look to extend his loan for another season — an option that could reap rewards for the Premier League stalwarts and the newly promoted minnows alike.