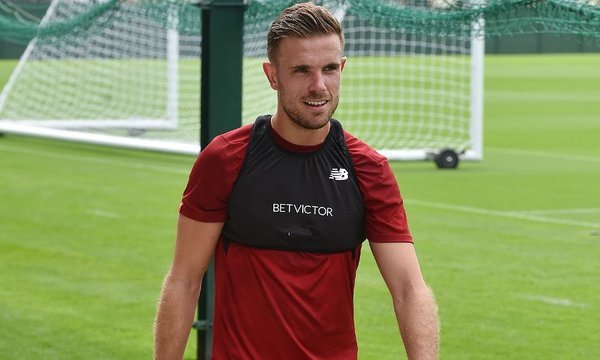 Finally back on the pitch and in the mix, Liverpool captain Jordan Henderson was one of the many familiar faces at Melwood yesterday as the Reds got the pre-season training ball rolling.

“I’ve probably been waiting longer than everybody else,” explained the skipper. “They have been enjoying the break but I’ve been dying to get back into it because I missed the end of last season. That was disappointing but I’m very positive and dying to get back into the swing of things,” said Henderson, putting the last five months behind him. “I’m looking forward to the hard work. I’m just glad to be back on the pitch. Hopefully I can stay fit.”

On the shelf since the win over Tottenham Hotspur back in February, the captain has finally moved past a foot problem that kept him out of the run in to the end of the season. Despite his notable absence, Liverpool still secured a spot in the top-four and the chance to claim a place in the Champions League proper. The kick-off of the campaign is just around the corner, but that’s not on the mind at the moment — it’s getting back to the hard work of being fit before the Reds run out in what is sure to be a tricky European qualifier.

“There has been a few of us that have had to work hard during the summer to try to get back as quickly as possible,” explained Henderson, never one to shirk away from putting in time on the training field. “It has been all go during the summer,” added the skipper, keen to get back in the game. “I’m glad to be back training with the lads on the first day.”