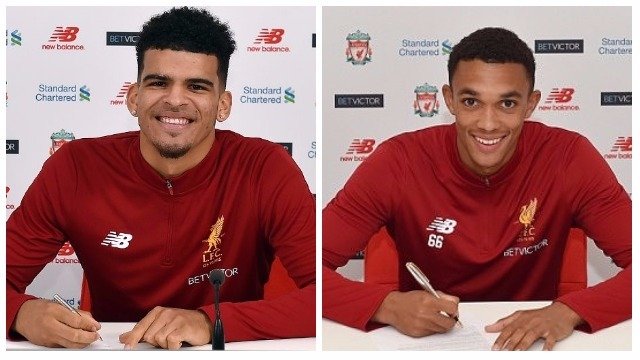 Although we’ve known for some time now that England U-23 World Cup winner Dominic Solanke would be joining Liverpool after choosing to make the move to Anfield on a free-transfer from Chelsea, the 19-year old was officially announced by the Reds yesterday with the 19-year old linking up with his new teammates at Melwood yesterday.

“It feels amazing and everyone has made me feel welcome already,” said Liverpool’s newest striker, speaking with the club’s official website for the first time. “Even just pulling on the training top, I was over the moon,” added Solanke, keen to get down to business. “Hopefully I can put on the shirt in the near future and make some good history here.”

He may have bagged the prestigious Golden Ball award for his exploits over the summer, but the former Chelsea attacker remains one for the future — much like new teammate Trent Alexander-Arnold who signed a new five year deal over the weekend. The 18-year old, who made his senior debut en-route to making 12-appearances for the Reds over the campaign, looks to have a bright future on Merseyside after impressing Liverpool boss Jurgen Klopp last season with a number of assured performances. While it’s going to take some doing to knock first team fullback Nathaniel Clyne out of his starting spot, he’s never been one to shy away from a challenge.

I was more than satisfied – overwhelmed and overjoyed. I’m really proud of what I’ve achieved,” said the youngster, reflecting on his Liverpool career thus far. “But I’ve said before, the hard work definitely doesn’t stop now. It’s only just beginning,” stressed Alexander-Arnold, knowing full well he’ll be given chances during pre-season to show what he can do. “Hopefully I’ll have many more moments like last season in this season and the seasons to come.”