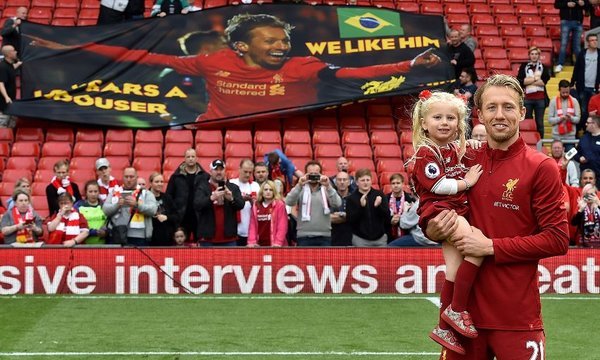 Knowing full well that playing time was going to be an issue this season, veteran Liverpool midfielder Lucas has completed a move to Italian side SS Lazio with time on the pitch the motivating factor behind the Brazilian’s decision to move on to a new challenge after 10-years at Anfield.

It has been a difficult few days for me when I’ve had to say goodbye to a lot of people that I spent time together for many years and became closer and closer, but I feel that’s probably the right decision for both sides,” said the midfielder, speaking to the club’s official website. “Just doing this interview means how much the way I’m leaving and the way I’d like to leave the club one day, because that happens with every player because players come and go,” added Lucas, getting sentimental. “It just shows how much I’m appreciated by everyone so that’s why I think it’s a good time to try a new thing, a new challenge for me, and for the club as well.”

Drafted in by former boss Rafa Benitez and going on to make an impressive 346-appearances en-route to completing 10-years with the club, the 30-year old has had his ups and downs at Anfield with a number of different managers and regime changes seeing him through some unsettling periods — though his commitment to the cause never wavered. A true cult hero, Lucas was a favorite of Kopites around the world and is now one of those former players we’re able to count as true fans of the club.

“A beautiful city when I first came. But I didn’t know much about the people, about the city, but of course I knew a lot of things about the club. Then slowly I started to understand how Liverpool people are and how this city is, and I just love it, every minute!” exclaimed the Brazilian. “I still feel that I will always be a part of this city and part of the club,” continued Lucas. “I’m going for a time – I don’t know how long, but for sure when I come back to visit friends and go to Anfield I’ll be another one of them.”