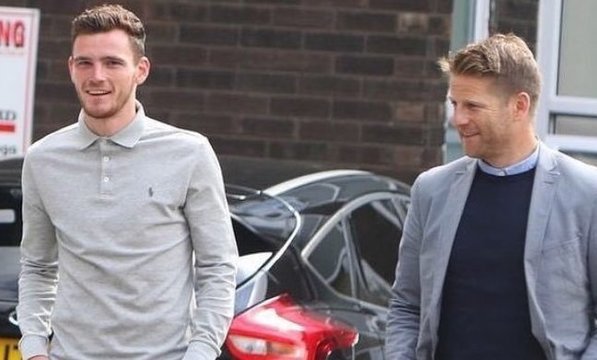 After Liverpool agreed to an initial fee of £8mil with a potential £2mil more coming through add-ons for the services of Hull City fullback Andy Robertson, the Scotland internationals move to Anfield was always going to progress quickly with the 23-year old being spotted on Merseyside earlier today after undergoing a medical at the Spire hospital.

Pictured alongside his agent, Robertson looks to be in good spirits after the Reds saved him from a season in the Championship with the recently relegated Tigers. Not only will the defender get to play Premier League football next season, but he’s got a shot at playing in the Champions League as well with the Anfield outfit facing a crucial qualifying match next month as they try to seal a place in the Group Stages of Europe’s elite club competition.

Although he won’t hook up with the squad in Hong Kong, it’s expected that Liverpool boss Jurgen Klopp will throw the 23-year old right in the mixer as he looks to embed him in to the squad as quick as possible. Set to take part in the Audi Cup competition in Germany, the Reds will face both Hertha Berlin and Bayern Munich with a potential third match on the docket should they make the final. To round out their pre-season preparations, a showdown with Spanish side Athletic Bilbao in Ireland is on the docket exactly one week before their Premier League campaign kicks-off with a trip to Watford.

That, of course, should give Robertson plenty of time to find his feet in the squad. The arrival of the Scotsman is not only to provide both cover and competition for vice-captain James Milner, but it’ll also free up Alberto Moreno to make an exit from Anfield. The Spaniard has been on the outs under Klopp for some time now and is expected to fetch the club somewhere around £15mil with a number of European clubs rumoured to be interested in taking a punt on the error prone defender.

More on this when one of these moves is confirmed…