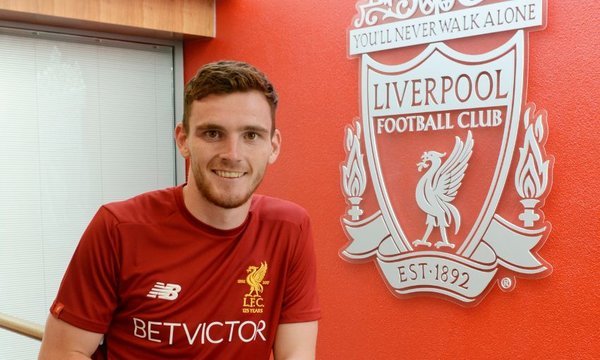 After he left Hull City’s training camp in Portugal, it was only a matter of time before Scottish defender Andy Robertson ended up at Liverpool. it was a medical on Thursday and confirmation from the club on Friday with the 23-year old joining the Reds on a long-term deal.

“There’s not many, if any, more special clubs than Liverpool,” enthused Robertson in his first interview since joining the Anfield outfit. “When you grow up as a kid you dream of playing with big clubs such as Liverpool and to make that a reality is a dream come true for me,” added Robertson. “I just want to prove to people that I can do it at this level, and hopefully I manage to do that this season and go on to do good things for this club.”

Brought in to provide both competition and cover for veteran utility man James Milner, the Scotsman won’t be content with a spot on the bench and aims to give the club’s vice-captain a serious run for his spot in the starting eleven. Regardless of his performances for the Tigers last season, Hull were still relegated and that, of course, raises questions over whether or not Robertson can hack it at a big club like Liverpool. While the proof will surely be in the pudding, it won’t be long until he tastes action with the club. Although he won’t link up with them on their Asian tour, he’ll be straight into training with the club ahead of their run of friendlies in Germany.

“This addition gives us fantastic competition in the left full-back position now,” explained Liverpool boss Jurgen Klopp, speaking to the club’s official website. “Obviously, James Milner did very well for us last season there and can play most positions on the football pitch. Alberto Moreno looks really good in pre-season and we have Jon Flanagan back, who can play left or right full-back,” added the Reds boss. “This signing strengthens us at full-back and I’m really pleased about this.”