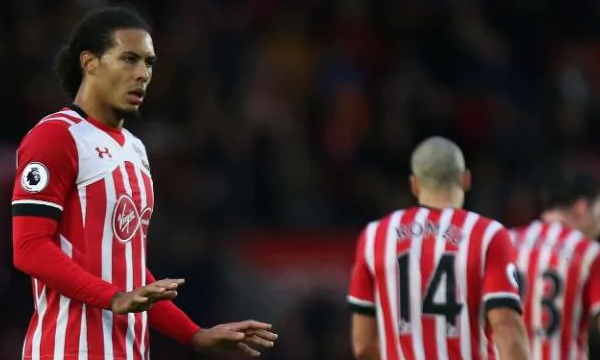 Virgil van Dijk, the Holland international soccer player and center back at Southampton seems to have focused on leaving his club due to his obsession to join Liverpool FC. As stated by Peter Odemwingie, the 26-year-old Dutchman now has an even worse situation at Southampton, which has rendered his position unsustainable. Even as van Dijk sets himself up to leave the club for Liverpool, most sports betting sites that offers English Premier League odds seem to reflect the tension surrounding the defender’s yearning to join the Reds at Anfield.

Last month, Liverpool FC almost sealed a deal with Southampton for the Dutchman; However, things did not work out as expected because the south-coast EPL club lodged a striking complaint about an alleged tapping up of the Saints center-back. With such unforeseen circumstances, Liverpool had to send an apology statement to Southampton management, which consequently pointed towards an apparent loss of interest for van Dijk. However, the center back seemed to remain unperturbed with the happenings after which he told Mauricio Pellegrino, the manager, that he actually wants to leave the club for greener pastures elsewhere.

With many issues still at stake, the Liverpool Echo reported that the Reds management remains on a wait-and-see mode as they tread carefully while weighting the current situation in line with the future of the club. However, Odemwingie analyzed the situation and declared that Virgil van Dijk does not have even a slim chance of maintaining his position at St. Mary’s because he was already left out of the squad that flew out to France, as other Southampton teammates begin their pre-season tour.

According to Odemwingie, many competitive players who undergo the same situation usually follow a rough path before getting back to their game. Consistent with the sentiments of the ex-striker at West Brom and Stoke, van Dijk is at the center of a bad situation affecting both clubs, which means the center back will not have ample time to play as before. As such, even his fans will feel disoriented if he fails to secure a place at either clubs or even elsewhere because he has already declared his passion to leave the club.

In a deeper perspective, van Dijk has a difficult situation at the moment, even though many other big clubs are on his case to sign him in the end. From van Dijk’s standpoint, leaving Southampton is a personal decision even though the club is big enough to sustain his career goals and needs Even with the multitude of fans supporting him, it is important to understand his situation from his point of view so that he can make the best out of his career. Therefore, his decision to leave Southampton could land him a place at Liverpool. Which would make him gain more respect while playing for European trophies.

As soon as van Dijk expressed his desire to leave Southampton, Pellegrino said that the 60m-rated center-back did not stop his training schedule, which he did on his own. With all his senses focused on leaving the club, the decision led to his manager declaring that he does not wish to become part of the unfolding story until all falls into place.