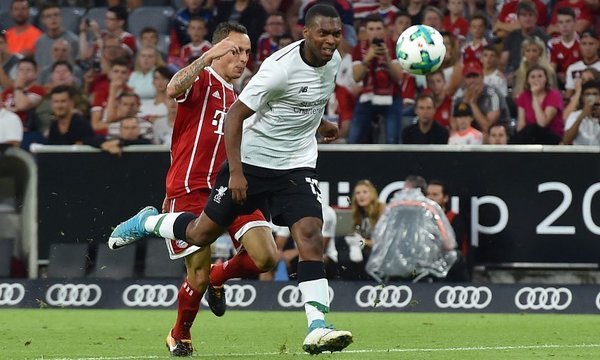 Liverpool may have run out 3-0 winners over German giants Bayern Munich to set up a meeting with Atletico Madrid in the finale of the Audi Cup later today, but it wasn’t all smiles following the final whistle after Daniel Sturridge had to be withdrawn with a thigh problem.

“I can’t say yet [how bad the injury is],” conceded Reds boss Jurgen Klopp, speaking to the press following the final whistle. “He hurt his thigh. He has really prepared well, really well, so I hope this is just a small injury and that he can play again soon. The goal was great and he had a chance just before that. You could see how fast he is,” explained Klopp. “It’s a shame and I hope it’s nothing serious.”

Lightening quick counter-attacks ended with Sadio Mane and Mohamed Salah opening the scoring as Liverpool raced to a two goal lead in the first half, but it was Sturridge who added the icing on the cake, dinking the Bayern ‘keeper in trademark fashion to make sure this would be a night to remember. With the club aiming to challenge at the top and put in a showing in Europe, Sturridge is set to play a key role under Klopp this season with the German knowing full well that he’s going to have rely on squad rotation to keep the boys fresh. With that being said, the 27-year old is going to have to stay fit if he’s going to be in the mix.

“I’m feeling great. I put in the work; I trained a lot in the summer in LA and I’ve not missed many sessions here,” explained Sturridge, staying upbeat despite his injury. “We’ve done triple sessions. I’ve pretty much trained every single session,” added the Reds striker. “I’m feeling the best I’ve felt for a while. I’m looking forward to the season and hopefully we can have some success this season as well.”