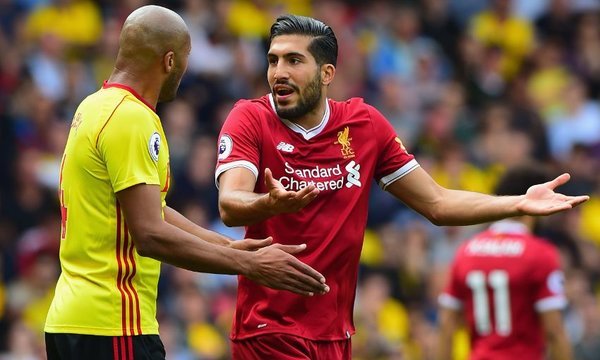 “The Premier League is well and truly back,” is what I said to my mate as soon as Miguel Britos sent the ball beyond Simon Mignolet from an offside position.

Truth is, I have missed Premier League football but I haven’t missed its officiating. It’s too easy to blame the linesman though and Liverpool should have defended better throughout the game.

Although the equalizer was definitely offside.

Liverpool's players look like they've never played on the same team before.

If Alberto Moreno, Dejan Lovren, Jordan Henderson and, to a lesser degree, Joel Matip played as if they’d met each-other before, we likely wouldn’t have been bothered by a late offside goal as we’d have been 3-0 up.

It was apparent that the game wasn’t going to be as straightforward as it should have been just eight minutes into the game; Stefano Okaka ran to the near post and powered the ball into the net, Matip was grounded and helpless.

Being 1-0 down isn’t the end of the world when you’re at Vicarage Road. You know more chances are going to come your way and that they did; Sadio Mane started this season as his did last by scoring just when Liverpool needed a goal most.

Only problem is, we can’t defend and Watford were able to restore their lead just three minutes after Mane leveled the scoreline.

The second goal epitomizes Liverpool’s defending, really; Moreno loses out in a tussle for possession, Lovren goes to ground at the wrong time and the ball is crossed in, Trent Alexander Arlond tries to clear the ball but it hits a grounded Matip and the ball is swiped into the open goal by Abdoulaye Doucoure as Mignolet was standing in the wrong position.

However, early on in the second half we saw just what Liverpool are capable of when attacking. Within 12 minutes, Jurgen Klopp’s men were 3-2 ahead following goals by Roberto Firmino and Mohamed Salah.

Salah, by the way, took some time getting into the game and missed a few chances but – overall – he impressed and there won’t be any Chelsea fans laughing at his performance.

Fantastic debut by Salah, can't wait to see how he kicks on for the rest of this season.

“Typical Liverpool,” everybody groaned on Twitter when the equalizer went in and they’re 100% correct, what have Liverpool been doing all summer? Our failures against Watford were all too familiar.

There are positives to be had from the game though, Liverpool scored three goals and we didn’t get out of first gear all game. At the other end of the field though, we were frankly embarrassing and hopefully the club now sees that we need to make more recruitments, thankfully the window is open for (just shy of) another three weeks.

It's going to be a long season if we have to out-score the opposition as we can't defend.