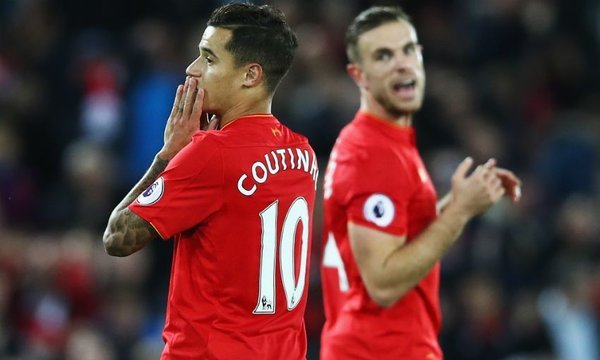 Despite the fact that Liverpool is gearing up to play their first Champions League game since going out at the Group Stage of the competition almost three years ago, a significant portion of the chatter in the build-up to their meeting with Bundesliga side Hoffenheim has revolved around Reds attacker Philippe Coutinho’s transfer request and the fact that the Brazilian has been omitted from the squad for the trip to Germany.

“It’s a difficult situation for Phil and whatever I say won’t help matters…but we want Phil to stay because he’s a world class player,” said Liverpool captain Jordan Henderson, speaking to the press ahead of the match. “Good question,” added the skipper when asked if there was anything he could do to convince Coutinho to stay at Anfield. “I don’t think I can influence the situation but I can have conversations with him.”

While that’s all good and well, it’s not going to help up tomorrow at the Rhein-Neckar-Arena. Hoffenheim, who went undefeated at home throughout last season, have shown that they’re no slouches and are sure to provide a stern test for the men in red. Coutinho, of course, could be available for the return leg in one weeks time, but whether or not he’ll hit the pitch remains to be seen. Nursing a back injury — one that could very well be more about securing a move to Catalonia than some sore muscles — the Brazilian has been out of action since Liverpool’s final pre-season friendly, but with the club standing firm over Barcelona’s big money offer, he could end up staying at Anfield for at least another season.

“Jurgen [Klopp] has come out and said no players are going to be leaving,” said Reds legend Robbie Fowler, throwing his backing behind the club’s position. “At the minute, there’s nothing to replace,” added the Liverpool born and bred striker. “The club have made it perfectly clear, their stance,” added Fowler. “No players are for sale and that’s the way we want it to be.”