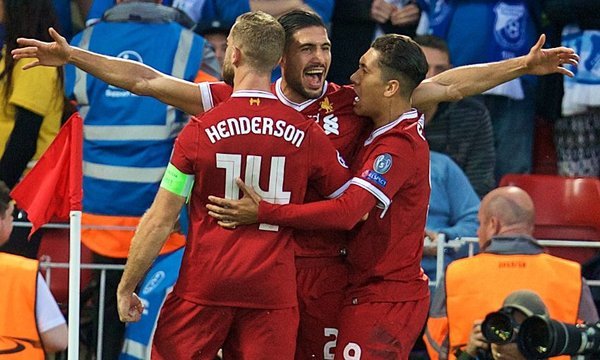 Hoffenheim boss Julian Nagelsmann learned a tough lesson as the German side were swept aside by a rampant Liverpool side dead set on sealing a spot in the Champions League proper — you never discount the influence of Anfield on a European night.

Carrying a narrow if not comfortable lead in to the second leg, there were the kind of nerves you’d expect heading in to kick-off, but three goals less than 30-minutes in saw the hosts effectively end this tie as a contest. An Emre Can double sandwiched a predatory strike from Mohamed Salah as the Reds went in to the break with the lead and Roberto Firmino applied the finishing touch just past the hour mark with consolation strikes from Mark Uth and Sandro Wagner hardly worth the mention.

“It has been a brilliant night, the atmosphere was brilliant all night and we were brilliant at the start and set the tempo,” said Liverpool captain Jordan Henderson, speaking to the press following the final whistle. “We let in a couple of goals so we have still got things to work on but overall we’re delighted to get back into the Champions League where Liverpool belong,” continued the skipper. “Getting back in to the Champions League was our aim and we’ve done it. Now when we get into the Champions League itself we have got to do ourselves justice and win some games there,” added Henderson. “I’m delighted for the lads and the fans. We’re in there and we’ve proved we can play against big teams. We’re happy to play against whoever we’re drawn against.”

It’s a familiar story; cause for concern on the back of a promising and wholly entertaining performance. For all the slick link up play between Sadio Mane, Can and Firmino to find the back of the net, Alberto Moreno’s penchant for getting caught up field allowed Uth his second goal in as many games and Dejan Lovren’s flat feet were to blame as Wagner headed past a helpless Simon Mignolet — if nothing else, we’re quite good at wreaking havoc at either end of the pitch.

Back on the big stage, we need to be better, but the real questions about our ability to do just that remains open to interpretation. Set to find out who we’ll be facing in the Group Stages when the draw takes place later today, there’s belief that a number of deals — including one for Southampton captain and top target Virgil van Dijk — could be completed now that we’re in the Champions League proper, but that’s neither here nor there. The Dutchman alone won’t fix our lingering issues at the back and as troubling as that thought might be, it’s a conversation for another day.

Under the bright lights of Europe is exactly where Liverpool belong; our love affair with this competition is legendary and what we’ve accomplished is still discussed with the kind of reverence reserved for the absolute best in the game. We had problems then, we have problems now and we’re likely to have problems in the future — we figured it out then and if anyone can figure it out now, it’s Jurgen Klopp.