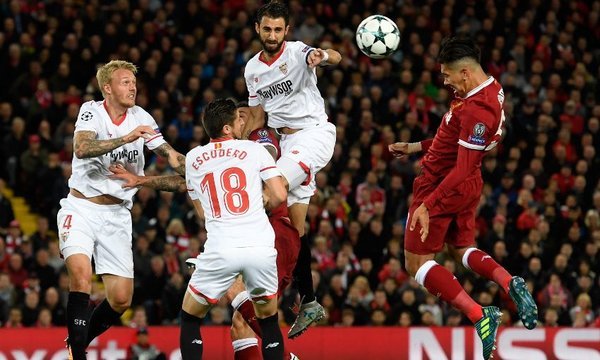 Furthering the “Liverpool is as Liverpool does” narrative, the Reds failed to do all that much to make up for the loss to Manchester City at the weekend by turning out a somewhat disappointing draw with Sevilla in their opening match of the Champions League Group Stage — an outing they should have won comfortably.

Maybe the phrase “somewhat disappointing” is a touch misleading; a draw in Europe isn’t exactly a result to turn your nose up at, but even a quick glance at the stats tells the tale in full and it’s one that should have had a vastly different ending.

Falling behind only five minutes in after en error from Dejan Lovren gave Sevilla forward Wissam Ben Yedder the kind of gift only the Croatian can provide, the hosts turned up the pressure in the best possible way, drawing level through Roberto Firmino before taking the lead off the back of some nitty-gritty high pressing from Mohamed Salah.

When Firmino missed out on the chance to bag a brace from the penalty spot, you got the sense that it wouldn’t even matter, but taking their foot off the gas in the second half the Reds wasted a myriad of chances and they paid the price for their wastefulness when some fancy footwork from Joaquin Correa ended with the Argentine stroking home a composed effort to silence Anfield and secure a point for the visitors.

Oh, right, the stats; under normal circumstances, only having 2-shots on target would be an abhorrent return for 90-minutes in the Champions League, but when you’re up against Liverpool and you can bury both of them, Sevilla won’t be worrying about the numbers one bit. The Reds, on the other hand, well, they put 7 on the net out of a total of 24-attempts and came up with the exact same tally despite Philippe Coutinho coming off the bench for his first appearance of the season and a Daniel Sturridge making a cameo appearance right at the end.

“It was pretty much a winning performance for 85-86 minutes and the team played well against a side who play well. We had answers for everything apart from the goals,” explained Jurgen Klopp, knowing full that isn’t quite good enough. “I have to see them again. That is not the good thing. It was an exciting game from my side, everyone saw our desire and passion but we got a point,” continued the German, trying to draw some positives. “We know we have to improve but there is so much potential and we can work with this,” added the Liverpool manager. “It is a draw – it does not feel too good but I am fine with big parts of the performance.”

It’s the same old story and one that I’ve told and you’ve heard enough times — that it’s now being told in the Champions League is both troubling and exciting in equal measure. That we’re back to Europe’s biggest stage is an accomplishment in itself, but our inability to match our scintillating attack with a defense that can even think about holding a candle to what goes on at the other end of the pitch remains a constant worry.

That Joe Gomez, who was sent off for the final minutes after picking up a second yellow card, will be suspended for the trip to Russia will only compound those problems, but that’s a worry for another time. It’s a bit too early for panic stations considering that was our first match, but we’ve done ourselves no favours and the tough task of qualifying for the knock-out round has only gone and got that much more difficult. Liverpool is as Liverpool does — at least we’re never dull.