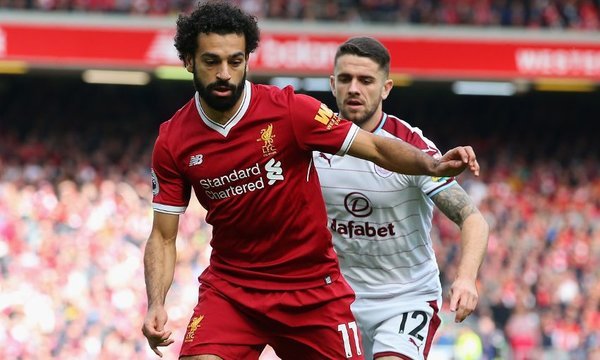 Since there was no way they were going to solve their defense problems in a matter of three-days, it was very much a case of “second verse same as the first” as Liverpool followed up their disappointing draw with Sevilla in the Champions League on Wednesday by sharing the spoils with Burnley FC at Anfield — the second match this week they should have won comfortably.

While it might sound like a bit of a reach to start drawing parallels between their most recent visitors to Merseyside, the numbers don’t lie. The Reds, dominate both against the Spaniards as well as the Clarets, failed to put their chances away at one end while being far too generous at the other.

So, yeah…pretty much the same Liverpool you know and love.

Capping off essentially their first attack of the match, Clarets midfielder Scott Arfield took advantage of some good work from Chris Wood to volley a peach of a finish past Reds ‘keeper Simon Mignolet to open the scoring just before the half hour mark, but their lead didn’t even last five minutes with Mohamed Salah quickly restoring parity on the back of an Emre Can pass for his fifth of the season.

A second for the hosts looked a matter of when rather than if, but it never did arrive. Although they had to rely on a bit luck at times, Sean Dyche’s side have shown their not a team to be trifled with, following up an opening day win over defending champions Chelsea by snatching points from Tottenham and now Liverpool. In the right place at the right time to block, deflect or at the very least put off their opponents, the Clarets back-line held steadfast restricting the likes of Philippe Coutinho — making his first Premier League appearance of the season — and Daniel Sturridge to long range efforts or half-chances.

“We have still space for improvement, that was clear before the season, but we could have won pretty much all our games so far when you think about the performance,” explained the Liverpool boss Jurgen Klopp before letting the press know exactly what was on his mind. “Unfortunately, I still don’t feel any positivity in this moment, I am still in the 1-1 mood, but it is easy to see all the positive things from tomorrow on again. They are there,” added the German manager. “We have to be strong, I know that, but we really can be strong.”

And, as with the draw with Sevilla, he’s not at all wrong, but the horrible feeling of déjà vu and the would of, should of, could of’s that come in it’s wake aren’t easily forgotten. Any other day and this would have been chalked up to a turn of the fates or just a bit of poor luck, but it’s more of the same from a side that’s looking increasingly like they’re unable to rise above the rut just long enough to crawl out of it for good.

Maybe that’s not at all warranted considering it’s still early days, but the mistakes continues to pile up and cost us dearly. Klopp’s tactics aren’t short on entertainment, but it’s starting to look like they’ll be a fundamental shift required if we’re ever going to solve our problems at the back. The German has come under the gun for not drafting in defensive reinforcements this summer, but for all the deflecting, he’s right in stressing that one player isn’t going to fix our problems.

Teams that challenge for the title — or at the very least are in the mixer — turn these draws in to wins and though it wasn’t for a lack of trying, we just weren’t able to come up with the goods. That in and of itself is another familiar theme, but just because Liverpool is in a rut, it doesn’t mean that I have to fall in to it with them; it’s too early in the season for that, isn’t it?