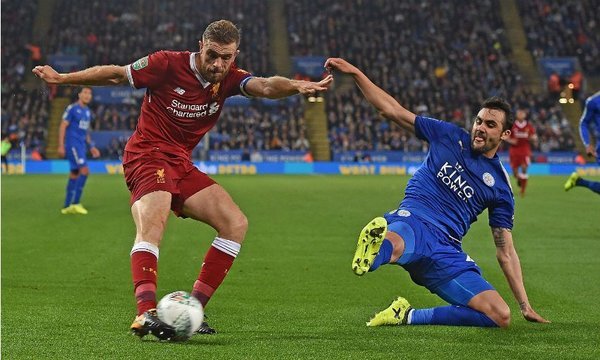 It’s seems like Groundhog Day is here again as Liverpool were dumped out of the League Cup at the hands of Leicester City — outplaying the Foxes over 90-minutes with the kind of beautiful football that entertains even the disinterested, but ultimately doesn’t win you much of anything.

No matter what you do on the field, if it doesn’t put the ball in the net at one end or keep it out at the other, it’s more or less superfluous; we said it after the draw with the Champions League draw with Sevilla last Wednesday as well as the scoreless outing against Burnley at the weekend and it still rings true today.

“We played really good football in the first half,” said Liverpool boss Jurgen Klopp, sounding downtrodden. “We had big chances, strange situations but football is a 90 minute game,” mused the normally jovial German, repeating some familiar talking points. “I am sick of goals like this. Leicester somehow survive in the game because we are not clinical enough,” stressed the Reds manager. “They scored too easily.”

The first of a Cup and League double header with Craig Shakespeare’s side, Klopp made his intentions to ring the changes known well in advance and naming the likes of third-choice ‘keeper Danny Ward, former Arsenal man Alex Oxlade-Chamberlain and local boy Jon Flanagan to his starting eleven, he was true to his word with a total of eight changes to the squad that drew with the Clarets only a few days ago. Despite the shake-up, it was more of the same — 70% possession, 21-shots on goal and wave after wave of attacks that promised to end in a goal before petering out in to nothing of the sort.

Fluid from the off, Philippe Coutinho and Andrew Robertson ran the show at the King Power Stadium with the Scottish fullback causing all sorts of problems for the Leicester back-line with his intelligent runs and pin-point crosses creating a whole crop of chances for the visitors. You could make the argument that youngster Dominic Solanke, who arrived on a free-transfer from Chelsea this summer, could have done a bit better with the opportunities that he was afforded, but it’d be a bit harsh. The same, of course, can’t be said for the more senior players in the squad with the aforementioned Brazilian and Oxlade-Chamberlain spurning what should have been go-ahead goals for the Reds.

With Coutinho withdrawn at the break, Liverpool lost their fluidity while the Foxes found theirs through the introduction of Shinji Okazaki. An injection of pace and guile was exactly what they needed as the Japanese forward provided both the breakthrough the hosts were desperately pushing for as well as an assist as Islam Slimani smacked a worldie past Ward to put the match well and truly to bed.

Leicester, creating something out of nothing, took heart and Liverpool, falling behind when they should have been comfortably ahead, let their heads drop; it’s a familiar story and not one that I’m relishing repeating. Did we need another game? With them coming fast and furious, the obvious answer is “no”, but that’s one piece of silverware off the table and it’s not even October.

We have to do better this weekend. I’m not sure how, but we have to or things are going to go from bad to worserester.