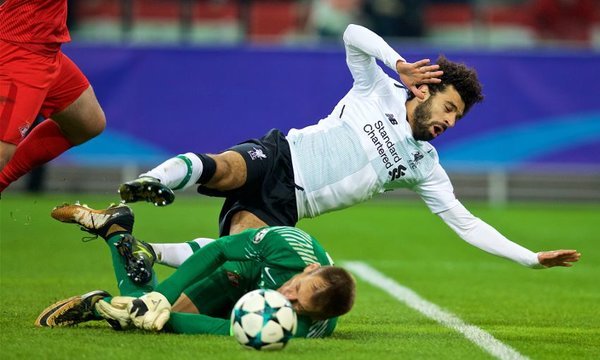 It’s another case of second verse, same as the first as Liverpool bossed proceedings at the Otkrytiye Arena only to go on and share the spoils with Spartak Moscow in another frustration filed Champions League outing.

After drawing with Sevilla on Match Day one, this isn’t the result the Scouse side were hoping to bag. Directly against the run of play, Spartak midfielder Fernando opened the scoring when he curled home a free-kick from just outside the box — an effort that Reds ‘keeper Loris Karius should have at the very least got a glove on. The Russian’s lead didn’t last long though as a flowing move from the visitors ended with Philippe Coutinho sweeping home his first goal in UEFA’s premier club competition.

By all rights that should have been only the start, but strange times are here and though the attacks continued to come in waves, the finishing at the end of them never quite lived up to the electric build-up that came before.

Starting together for the first time, the “Fab Four” of Coutinho, Roberto Firmino, Mohamed Salah and Sadio Mane ran out to largely mixed reviews with each creating and missing at least one chance each — which, should have been more than enough for us to see this one out in a relative degree of comfort. Throw in Daniel Sturridge looking rusty, Trent Alexander-Arnold shooting when he should pass and not one, but two Spartak ‘keepers playing the game of their lives and you’ve got a recipe for what I like to call “angry typing”.

“Of course. As I said it already a few times, we in this moment are not the luckiest team in world football, so it’s not that things go easy for us,” explained a clearly frustrated Jurgen Klopp. “We did enough and we had four or five 100 per cent chances and that’s then disappointing but it is like it is. In the Champions League in the group stage the only target you have is to go through the group to the next round, and that’s still possible for us,” stressed the German manager. “We know now more about two teams in the group and both games we could have, or should have, won but we didn’t.”

And exactly how we didn’t is a question for the ages; usually by this point I’d be talking about the late goal or the defensive error that spoiled an otherwise splendid bit of football, but it’s the action at the other end of the pitch that’s a growing cause for concern. To be fair, any other time you’d chalk it up as one of those days where the ball just won’t go in the net, but one of those days is turning in to one of those weeks and…well, you’ve heard this story before.

It’s been eight years since we’ve won an away match in the Champions League — and that ungodly run should have ended in Russia. Now, for those of us who can stay pragmatic, a draw away from home in the Champions League isn’t the worst result. There’s a lot of football left to be played and if we can turn the tide, we can still get out of this group at a canter. With that being said, we’re going to have to find our way out of this rut or pragmatism is going to turn to panic and spur an entirely different conversation after we host Maribor in three-weeks time.