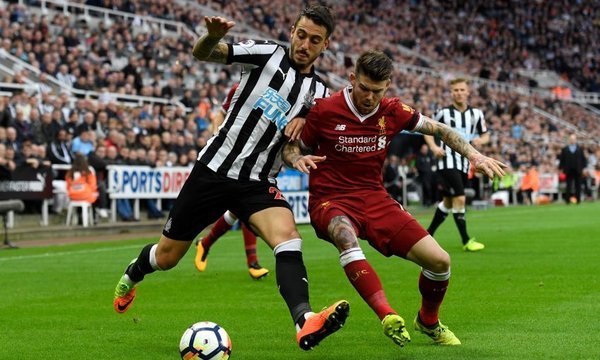 Missing out on their chance to jump in to a Champions League spit ahead of the international break, Liverpool drop to seventh in the table as their woes in front of the net continued as they drew away to Newcastle United. Sadly, the “more of the same?” mellow dramatics from the perpetually unsatisfied are starting to sound less like hyperbole and more like reality.

The Reds were always going to need to bag a few to get anything at St. James Park and they looked to be on the right track when Philippe Coutinho opened the scoring right before the half hour mark, but their lead lasted less than ten minutes as some calamitous defending from Joel Matip and Simon Mignolet allowed Magpies striker Joselu to draw level with one of the most bizzare goals you’ve seen in quite some time.

In typical fashion, Liverpool looked primed to hit back almost immediately, dominating possession and bossing play only to squander their chances time and again. Even restoring Daniel Sturridge — usually as sharp as they come — to the starting eleven in place of Roberto Firmino couldn’t snap their cold spell in front of goal while Newcastle, who in comparison created very little as they camped in their own half for most of the match, made their visitors pay by capitalizing on one of their on their only chances to share the spoils.

“I am disappointed, frustrated, whatever you want,” fumed Liverpool boss Jurgen Klopp. “They got one chance and scored. That doesn’t feel too fair. If you don’t help yourself no one else help you,” added the German. “It will be like this until we score. We play like this it makes sense that we play like this usually we score in situations like this,” mused the Liverpool manager, cleary sick of having to rehash it all again. “We have to accept this and carry on.”

Newcastle, for their part, looked very much like a team managed by Rafa Benitez. Still extremely popular with the Anfield faithful, the Magpies were compact when it counted and calm under what was increasing pressure. Very much against the run of play, the hosts almost bagged what would have been an undeserved winner right at the end when Mohamed Diame capitalized on some lax defending only to spur his chance from a well worked corner.

That this came only minutes after Alex Oxlade-Chamberlain missed his own opportunity to put the match to bed is almost not worth noting — it’s now bordering on cliché for the Reds to end up falling flat after promising so much more.

And, unfortunately, that’s how they’re going to be leaving things. If going in to the international break on a downer isn’t bad enough, coming out of it we’ll be coming up against a Manchester United side that’s absolutely flying. Form goes out the window and blah, blah, blah, but it’s concerning times around Anfield and if we come up short against our biggest rivals those starting to ask questions of Klopp — a situation that I wouldn’t even of fathomed at the start of the season — will get a much bigger platform to launch further inquiries.