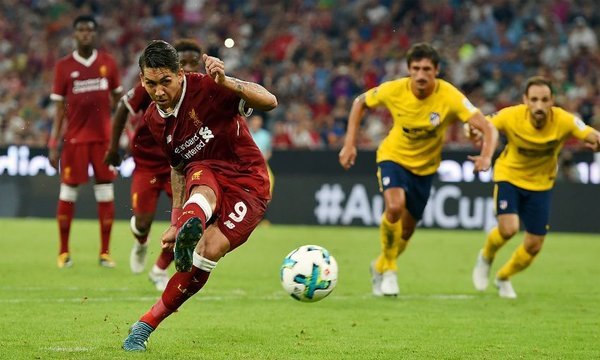 The Reds missed out on the perfect opportunity to jump in to the top four ahead of the international break and their showdown with bitter rivals Manchester United when they drew with Newcastle last weekend. According to BetOnline.ag, Liverpool is currently at +3300 to win English Premier League 2017-2018 season, but they’ll be looking to better those odds by getting their season back on track against Jose Mourinho’s unbeaten side.

Struggling as of late, the Reds misfiring attack will need to be at their best if they’re going to breach what’s been a stodgy United defense. Roberto Firmino, who is in line for a new deal at Anfield, has been a large part of what’s been good about Jurgen Klopp’s side side this season with two goals and as many assists in 7-seven Premier League matches, but the Brazilian has been quick to tip his hat to his team mates in an effort to get the goals flowing once again.

“They are giving us quite a lot of chances on goal. They’re very quick and we’re enjoying playing with those two and the speed they give us,” said the Liverpool attacker when asked about Mohamed Salah and Sadio Mane. “They’re giving us a lot of chances to create goals, which is really important for the team. It’s excellent. To play with these guys – it’s very important for me and everyone. It’s very good for the entire team,” continued Firmino, going on to say, “They are really nice lads, good people and I hope that we can help Liverpool to the absolute maximum to play well.”

United, of course, has only given up two goals since the start of the campaign, but their visit to Merseyside will be their first real test of what’s still a relatively new season — and Liverpool’s front three will be unlike anything they’ve faced. With that being said, for all the talk of Liverpool’s attack, they’ve stuttered in front of net as of late with a hammering at the hands of Manchester City and some disappointing draws in the Champions League putting Firmino — and the rest of the side — in line for some serious criticism.

“I think so, yeah definitely (we expect more from Firmino),” explained Sky Sports pundit Danny Higginbotham said. “The type of player he is he will be expecting more from himself as well, I don’t think there’s any question about that,” stressed the former Manchester United man. “That is the type of player that he is, he can get into them areas,” added Higginbotham. “The frustrating thing is they’re creating a lot of opportunities but since that Arsenal game, they’ve created the most chances in the Premier League but haven’t scored as many as they would like.”