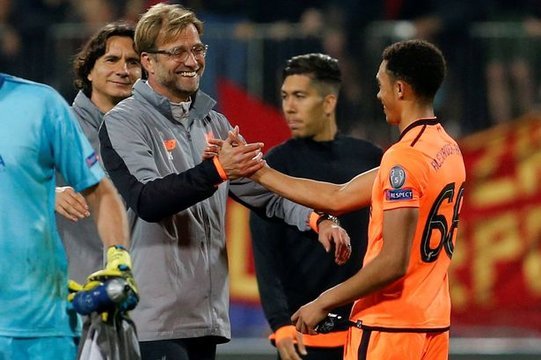 After weeks of struggling in front of the net, Liverpool finally found their shooting boots, putting seven unanswered goals past NK Maribor to record their biggest ever away win in the Champions League. They’ll face a far sterner test when they visit Tottenham Hotspur in the Premier League this weekend, but their new found confidence in front of the net will have punters checking the odds as they back the Reds to build on that historic night in Slovenia.

“A lot this season already [we have been] alone in the box to make a cross or a pass, but were not relaxed enough to play the right pass. Tonight it was different,” enthused Liverpool boss Jurgen Klopp. “Always when we let them play, they played immediately and were around our 18-yard box and that only showed how good they could be,” added the German manager. “It was good – all-round a really, really good performance otherwise you cannot win 7-0 – so we are really happy about that.”

The floodgates opened almost immediately following kick-off and never did close as both Roberto Firmino and Mohamed Salah bagged braces on the night with Philippe Coutinho, Alex Oxlade-Chamberlain and youngster Trent Alexander-Arnold pitching in with strikes of their own.

Liverpool, who drew with both Sevilla and Spartak Moscow in their opening matches of the group stage, now sit on top of Group E; level on points with the Russians, but leading on goal difference. Sandwiched in their final three matches will be a tricky trip to Spain, but they’ll have the advantage of playing at Anfield for the other two as they host both the Slovenian champions and Spartak to close out the opening round of the Champions League. There’s no easy matches in this competition and progression is far from assured, but after the display we witnessed last night, it’s safe to say the boys will be up for it.

“I was told about the record after the game and I didn’t know,” said Klopp, obviously pleased to not only get the three points but to really make a statement. “The wonderful history of this club can feel like a backpack at times so it is nice to write our own good piece of the history,” added the Reds boss with a smile. “It will be difficult to beat that record. It is quite rare to win 7-0 but it showed we did unbelievably well.”