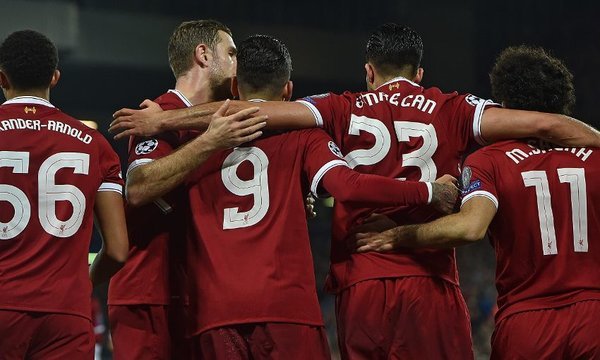 Maybe it looked a bit touch and go when half-time rolled around, but the Reds kept their spot on top of Group E and put one foot in the knock-out round of the Champions League with a comfortable 3-0 win over NK Maribor.

Predictable to the point where the pundits can boil the Liverpool tactical analysis down to one word — attack — there was only ever going to be one result. Weathering the storm, the visitors held on for the first 45-minutes in the face of some poor finishing from the Reds front-line, but Mohamed Salah made up for his first half indiscretions only five minutes after the re-start before a well worked Emre Can effort adding insurance and Daniel Sturridge’s late winner bumped the scoreline up to something that better resembled their utter dominance.

Outclassed and outplayed from the start, it looked more like damage limitation than football from Darko Milanic’s side as they spent what felt like the majority of match camped in their own penalty area. Reds ‘keeper Loris Karius, who has taken charge of European duties, was a mere spectator as his side chalked up an impressive 83% of the possession in the first half — though their inability to do anything of note with it was telling an increasingly familiar story.

Thankfully, that narrative didn’t last much longer; Salah, who was guilty of spurning a number of chances in the opening exchanges, looked the epitome of class as the Egyptian’s flying back-heel gave his side the opener they deserved and relived the growing tension around the ground.

If there was one bright spot for Maribor on the night, it came when they still had a chance of getting something from their trip to England. Stepping up to the penalty spot after Roberto Firmino was hauled down in the area by Aleksander Rajcevic, the usually dependable James Milner saw his lazy spot-kick saved by veteran shot-stopper Jasmin Handanovic to give the visiting supporters something to celebrate.

Can’s neat one two with Milner helped the vice-captain restore a bit of pride not long later and Sturridge’s second goal in as many games came on the back of an excellent cross from Alberto Moreno with the Spaniard proving his worth in the final third yet again.

While it wasn’t quite the seven goal pasting they doled out when they visited Slovenia, it was worth the same amount of points — and with Sevilla edging past Spartak Moscow in the other game in the group, it was just enough to keep them ahead of the chasing pack.

“At half time, it was a similar situation to the last game against Huddersfield against an even more defensive side. But we did not create enough and it was going to be hard work,” explained Liverpool boss Jurgen Klopp, full of praise for the Slovenian champions. “They changed completely their usual style and you can see how good they are,” added the German manager. “The group is maybe the most interesting in the Champions League, nothing is decided. If you want to play in February, you have to win your games.”

Defeat at Anfield means that Maribor have no chance of progressing to the next round, but it’s going to be tense for everyone else in the group — especially the Reds. While both Spartak and Sevilla should have a relatively easy time against the Slovenians, we face a tricky trip to Spain ahead of hosting the Russians in our final match of the Group Stages. Nothing like doing things the hard way, right?