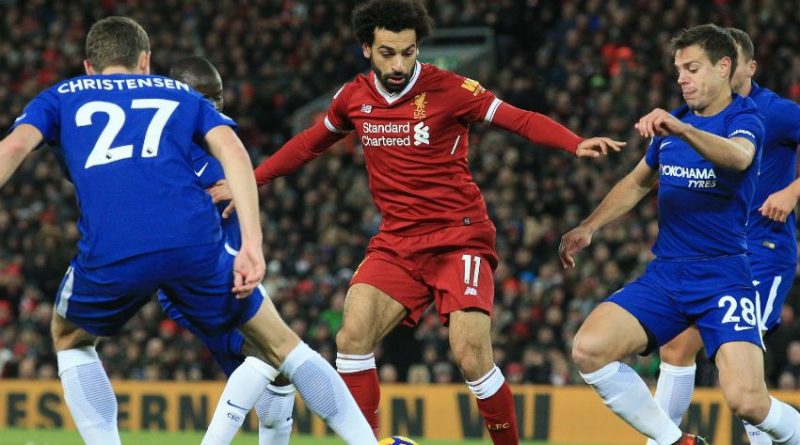 Coming off a disappointing draw with Sevilla in the Champions League on Tuesday, Liverpool once again failed to hang on to a lead as a fluke Willian strike earned Chelsea a share of the spoils as the Blues fought back from a goal down to draw at Anfield.

Mohamed Salah, starting against his former employers, looked lively throughout a tense first half and as the Reds biggest threat there was no surprise when the Egyptian found the breakthrough just past the hour mark. Reacting first to Alex Oxlade-Chamberlain’s poked pass, the 25-year old swept a composed finish past a helpless Thibaut Courtois to send the Kop in to wild celebrations, but we all know a one goal lead is never quite enough for Jurgen Klopp’s side…

Making a raft of changes after a high-octane outing in Spain, the German manager welcomed Joel Matip back in to the back-line, but the real shake-up came up front with Daniel Sturridge and Alex Oxlade-Chamberlain drafted in to the starting eleven in place of Roberto Firmino and Sadio Mane. Whereas Chelsea employed no less than five at the back at any one time with either N’Golo Kanté or Danny Drinkwater regularly dropping in as a fifth defender in a match they’d clearly rather not lose than win, Liverpool were their typical attack minded selves.

Although they clearly missed Mane’s pace and Firmino’s industry as they pressed high and tried to shift the ball around the Blue’s well drilled back-line, Sturridge’s hold-up play was excellent with the striker able to bring either Salah or Philippe Coutinho in to the attack as the Reds pressed for an early opener. Enjoying the bulk of possession, it looked only a matter of time before they found the breakthrough, but that final ball was always lacking and in reality it was the visitors — and Eden Hazard in particular — who was knocking hardest on the door.

For all the pomp and circumstance of Liverpool’s endeavour, they’d go on to register only four shots on target with the first of them coming well in to the second half.

“You need a bit of luck and we didn’t have it again. We wanted to change the system before the equaliser and the referee didn’t allow us,” said Reds boss Jurgen Klopp, once again left to bemoan the decisions of the referee. “We wanted to go to five at the back, to change the situation and it’s not too cool to have conceded. Of course, if you’re at home 1-0 up, you want the three points, that’s my problem at the moment,” continued the German, clearly disappointed. “It was a really good game and at the end, it’s one point against Cheslea. There will be a moment tonight when I think the result is OK – but not now.”

And, you know, a point against Antonio Conte’s side is a pretty decent result given the larger context of the league campaign, but when this is the second time in a week you’ve given up a lead in an important match, sharing the spoils rankles a bit more than usual. Throw in the fact that the equalizer was actually a cross and not a shot and you’ve got enough salt left over from your wounds to make Margaritas.

There’s all kinds of arguments to be made after a result like this — introducing Mane earlier would have taken some of the pressure off of Salah and enabled our counter-attack, starting James Milner ahead of Georginio Wijnaldum took a hefty amount of bite out of our midfield, Simon Mignolet shouldn’t have been caught flat-footed with Willian dancing around in the box and original Cheerios are actually superior to their Honey Nut brethren, but I digress.

Much like the boss, I’ll wake up tomorrow feeling a bit better about what I saw today. There’s positives to be found in our performance, but I think they’re hiding at the bottom of a bottle or two. Excuse me while I investigate further…