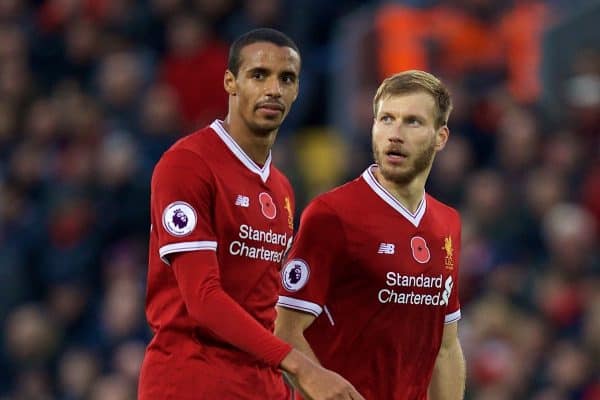 Coming out of the comfortable win over Stoke City earlier in the week, Liverpool are straight back out on the road with a trip to newly promoted Brighton and Hove Albion coming up tomorrow. With the fixtures coming fast and thick, Reds boss Jurgen Klopp has been forced to manage the fitness of a number of players, but the German manager won’t have a decision to make regarding Joel Matip with the Cameroonian defender set to sit out the meeting with the Seagulls after picking up a knock at the Britannia Stadium on Wednesday.

“It looks like Joel Matip is out,” said Klopp, speaking to the press ahead of Saturday’s trip to the Falmer Stadium. “After the game he had a problem, he felt something muscle-wise. We have to make the final assessment but it doesn’t look like he is available for tomorrow,” added the Reds manager. “That’s pretty much all.”

Climbing in to fifth place and within touching distance of a Champions League spot, Liverpool will be hoping to keep their good run of form going when they line-up against an over-achieving Albion. Sitting comfortably mid-table, Chris Houghton’s side have proved a tough nut to crack this season — especially at home where they’re unbeaten in their last six outings.

While he’s almost certain to make some changes to the side that beat Stoke mid-week, it sounds like we’ll still be waiting for Adam Lallana to make his first start of the season as the midfielder builds up his fitness. Thankfully, Klopp has a number of options to choose from in the middle of the park, but the same can’t be said at the back. With Matip set to miss out, Ragnar Klavan would be a shoo-in to rejoin the starting eleven, but the Estonian defender has been under the weather and may not be ready for a run out so soon.

“Adam Lallana is still building up his fitness,” said Klopp, all but ruling him out of the Seagulls clash. “Ragnar Klavan was ill but hopefully he is not anymore, especially when you think about Joel Matip’s situation. It’s not that we have a big choice to make in defence, so that’s the situation,” explained the German. “We had a few knocks how it is after a game, and it is the shorter part of the week with Wednesday and Saturday [games]. It’s not a long time to recover from different things.”