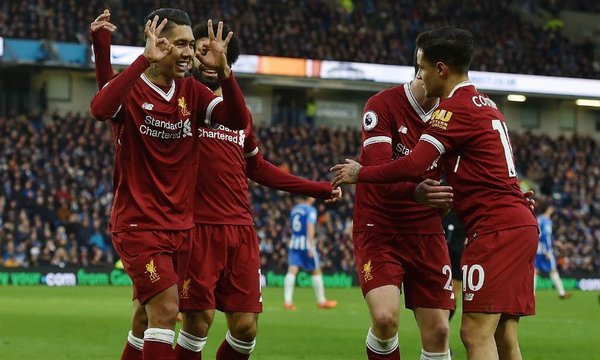 Keeping pace in the race for a spot in the top four, Liverpool built on their comfortable mid-week win over Stoke City with yet another victory on the road as the Reds ran out 5-1 winners at the Amex Stadium.

If nothing else, newly promoted Brighton and Hove Albion have been strong at home, but a pair of quick-fire goals on the half-hour mark from Emre Can and Roberto Firmino put the Seagulls straight under the kosh. The Brazilian would double up not long after the break when a breathtaking bit of end to end saw him finish coolly past Mat Ryan and though the hosts would pull one back from the penalty spot, Philippe Coutinho scored a quirky free-kick and forced Lewis Dunk in to an own-goal to turn what looked like a respectable result in to a rout and propel Jurgen Klopp’s side in to the top-four for the first time this season.

Both need and necessity prompted the German in to making a number of changes as Liverpool played their third match in seven days. With Joel Matip sidelined through injury and both Joe Gomez and Ragnar Klavan ill, the Reds boss was forced to pull together a make-shift back-line as Emre Can and Georginio Wijnaldum dropped in to the defense alongside Dejan Lovren and Andy Robertson — making his first start since September — drafted in on the opposite flank to Trent Alexander-Arnold.

For all the pre-match confusion and the unnecessary social media fume, it worked out all right, didn’t it?

“We had no idea we were going to have to line up like this until yesterday’s meeting and I’m pleased for the boys. They were able to adapt,” explained Klopp, speaking to Sky Sports following the match. “Our line up surprised everybody. It’s a good moment that we can do things like this. They adapted and did the job,” added the German manager, happy to get out of East Sussex with. “We need to adapt with plenty of different systems. That’s how it should be.”

When we’re on song, we’re far too good and we showed that today — all over the pitch. Shifting from one end to the other in double time, our counter-attack is one of the best with the footballing intelligence of Salah, Firmino and Coutinho absolutely next level. When you consider that Sadio Mane wasn’t even on the field today, it’s even more impressive.

That, of course, isn’t to say that Albion didn’t have their chances; although the penalty was soft a best, the hosts had more than one opportunity to put the ball in the net, but a combination of poor luck, worse finishing and Reds ‘keeper Simon Mignolets kept Hughton’s boys from making a match of it with the Belgian’s reflexive save on Glenn Murray a highlight reel worthy bit of shot-stopping.

Heading in to an all important meeting with Spartak Moscow in the Champions League on Wednesday and the Merseyside Derby the following Sunday, these are the kind of numbers you want to be putting up. Without getting too far ahead of myself, it appears we’re starting to hit to form right ahead of the busy holiday period — and that doesn’t seem to be a coincidence considering we struggled during this time the last two seasons. This Klopp character is good at the football, isn’t he?