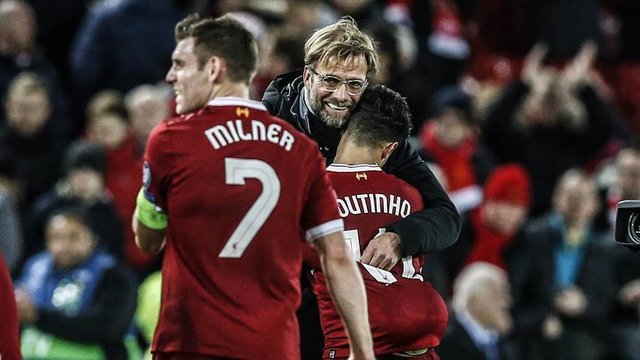 It was a bit tense going in to the match after drawing with Sevilla last time out, but Liverpool sailed in to the knock-out round of the Champions League with a resounding win over Spartak Moscow at Anfield that saw the Reds score seven unanswered goals to win their group at a canter.

“If we perform like this tonight, if we are that clinical, then yes we can [strike fear into opponents],” explained Jurgen Klop, speaking to the press following the final whistle. “But we had the same players before and they didn’t score and then it is not that we talk like this. That is not a criticism of the past. If we perform like this then we are obviously a threat, 100%,” stressed the German boss. “And if you see how Dom Solanke performed at Stoke, how Daniel Sturridge performed when he came on tonight – he could have scored two or three and he made a goal for Sadio – that’s good.”

Good might be a massive understatement, but at this point, there’s no point in arguing semantics — Liverpool in full flow are something to behold and against a side at their attacking best, the Russians just couldn’t cope.

Through to the round of sixteen having failed to advance at their last two times of asking, the Reds will be a worry for whomever their paired against. With that being said, there’s some serious contenders waiting in the next round. While they could very well end up with one of FC Basel, Shakhtar Donetsk or FC Porto, there’s a real chance they could be running out a real Juggernaut of the European game with the likes of Real Madrid, Juventus and Bayern Munich potential opponents.

“We started well and created chances,” said Reds midfielder Georginio Wijnaldum, speaking to BT Sport following the final whistle. “At 3-0 we were a little bit lacking in concentration and made a few mistakes but in the second half we did it good,” continued the Dutch midfielder with a little nod towards their slip-up in Spain. “That’s why we train on the training ground, to create chances for each other,” added Wijnaludm, knowing full well that he was part of something special. “We created space for other players.”